The Spook School & the importance of sports 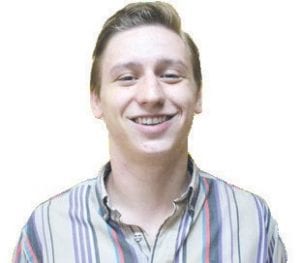 “I f I played sports in high school, would I even like me? Would I be someone to be proud of…or just this mess that you see?”

Driving around aimlessly a few weeks ago, I was asked this seemingly dozens of times over the course of a four-minute song that graced my ears for the first time.

This question is pondered repeatedly by the Scottish band ‘The Spook School’ on the final track of their latest album, aptly titled ‘High School.’ Nye Todd, the band’s lead, uses this question to explore the introversion of his high school experience, whether he’d have the same relationships or still write music and the like. The song carries with it the echoes of the stereotypical jock-art kid dynamic while primarily addressing the regret Todd carries of a lost relationship(s).

I listened to ‘High School’ once through, clicked rewind on my CD player and listened a second time. Once it concluded, I shut off my car stereo, completing my drive in a deafening silence.

I couldn’t stop asking myself variations of this stupid question from this slightly-above-average song, and I could not figure why.

I did play sports in high school, but I don’t regret it at all. I was on a team for 11 of 12 possible seasons during my days wandering the halls of Bishop Foley Catholic. I feel fondly for those days, but I don’t glorify them; in fact, I don’t even think about them all that much. Yet somehow, in the dark recesses of my mind, I know that playing sports in high school birthed the man who now sits here typing this column, for better or worse.

Now, every time I attend a Lapeer High basketball game or simply recap a Mayville wrestling match, I end up asking myself the same exact question that Todd and the Spook School ask their listeners. These contemplations aren’t dripping in regret or a wondrous nostalgia, but rather with a genuine curiosity. Am I this way because I played sports in high school, or did I play sports in high school because that’s just who I am? I have trouble answering this. I’ve been subconsciously asking myself this for years. It’s an enigma that’s almost as rich as it is pointlessly self-indulgent.

I keep circling back to the same obvious sentiment: the environments in which we surround ourselves in our youth ultimately end up creating that adults that we inevitably grow into. In my mind, nothing is as vital to person’s progression into adulthood than engaging with a team in a competitive fashion, but I know that I only think this because my youth was filled with a constant barrage of games, practices and goofing around on long bus rides through Metro Detroit. I cannot replace the formative experience that was taking a daring shortcut through the woods with my younger brother Craigen and our pal Brodie during a cross country practice or watching a fly ball in batting practice smack the forehead of a confused Ryan Griffin as our JV baseball team lost its collective mind with laughter.

The most interesting part of “High School” occurs at the end of the first verse. Todd asks “If I played sports in high school…would I have wasted less time?” As an alleged art kid, I was expecting the opposite from Todd. I assumed that he’d note that engaging with sports in youth would just have been a major waste of time, but he inverts that sentiment.

However, I don’t completely agree. The act of sport itself can be considered a fool’s errand, but it’s in the world surrounding and adjacent to sports where you’ll find yourself and the person you’ll eventually become.