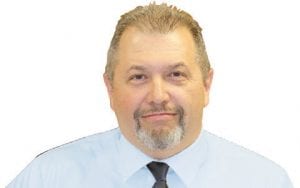 I f you had any doubt spring is just around the corner, take a drive down almost any road in Genesee County and you’ll see — surer than pulling a furry rodent out of his hole in the dead of winter — that pothole season has arrived.

That means spring can’t be too far away, that is, of course, if you can successfully navigate the minefields dotting our roads and highways. If you drive a particular route ever day you get to know the terrain — when to swerve, when to straddle those craters in the pavement — but if you aren’t used to the route it can often be brutal.

But never fear, the Michigan construction industry is going to make everything better. No, they’re not going to fix the potholes — not unless the state pays them a lot of money it no longer has. They’re going to let us know where the potholes are so we can avoid them.

The Michigan Infrastructure and Transportation Association (MITA) says (an) online system will make it easy for the public to report and avoid potholes during pothole season, which is expected to worsen in the coming weeks as things begin to thaw.

This system allows Michigan drivers, those who haven’t yet been seriously injured or maimed while driving these pothole infested streets, to visit justfixtheroads.com and submit pothole locations, photos and comments to MITA, the road industry group sponsoring the new reporting system. In addition to collecting the pothole data, MITA will report the pothole locations to state and local road agencies as a “public service.”

I guess I understand where MITA is coming from. They want to put pressure on government to fix the potholes, which could provide a boost to their industry since they’ll be the ones contracted to do a lot of the repairs.

But I don’t really know what the website will accomplish beyond that. It will be a place where people will go to commiserate over the atrocious conditions of our roads and the deteriorating infrastructure in this state, but will it really motivate politicians to do more about the roads?

The state budget is in a shambles. Roads are a major concern but with property values declining and fewer motorists on the roads because more are moving out of state to find jobs, I don’t really see a major fix coming to roads in the state for some time.

So until then you can check justfixtheroads.com to see what roads you might want to avoid, or you can develop your own system of traversing the craters on the roads of Genesee County. But at least we know spring isn’t far away — provided we don’t get swallowed up by a pothole, car and all.