The VILLA ‘movement’ has arrived 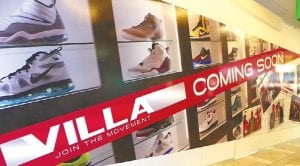 The wall has come down in a “soft opening” of the new Villa store at Genesee Valley Center mall but a grand opening is being planned for later this month.

The store is doing what they call a “soft opening,” said Kristen Cassabon, mall marketing manager. That’s typically a brief test period in which a new establishment gives its staff time to become familiar with operations before having a big public opening announcement.

A grand opening with promotions and fanfare is being planned for October 19-20, Cassabon said.

Villa is a Philadelphia-based company which bills itself as a “lifestyle retailer of urbaninspired footwear and apparel.” It currently operates about 35 stores in Pennsylvania, Ohio, New Jersey, New York, Delaware and Michigan.

More than just a shoe store, the store promotes itself as “a movement’ targeting troubled innercity communities.

Besides hiring from those communities, it advocates educational programs, volunteerism and other community partnerships aimed at community improvement, according to information on its web site.

Store patrons are askedRUVilla?and invited to Join the Movement via social networks and in-store events.

Since opening its first store in 1989 in Reading, PA, the VILLA movement has been guided by a vision “to provide service and leadership opportunities to communities that have been historically underserved and disadvantaged.”

“Our communities are often plagued with joblessness due to an under-skilled and undereducated population,” VILLA states on its web site.

“In many communities, drop out rates are high and graduation rates are dangerously low. Our neighborhoods are in severe economic decline due to concentrated poverty and lack of local business development. Our young people can be misguided due to lack of cultural exposure, physical activity and community role models.”

To accomplish its goals, VILLA has partnered with schools, local governments and neighborhood groups, completing more than 5,000 hours of community service and 100 service projects.

Grand opening details for the Genesee Valley store are not yet available.