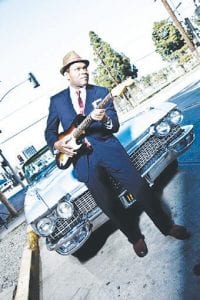 Robert Cray Band launches the season at The Whiting on Sept. 8.

FLINT — The 2015-16 Broadway and Fall lineup at The Whiting has been announced. The new season includes musicals, spectacles, and kicks off with a five-time Grammy award winning musician.

Launching the season on Sept. 18 is the Robert Cray Band. With five Grammy Awards, this rock blues icon is considered one of the greatest guitarists of this generation. Best known for his hit “Smoking Gun,” he was inducted into the Blues Hall of Fame in 2011.

Black Violin returns to The Whiting’s stage on Sept. 25. Back by popular demand, and with an all new show, Black Violin is the blend of classical, hip-hop, rock, R&B, and bluegrass.

Direct from Broadway, The Illusionists will perform three blockbuster performances Oct. 9-10. This mind blowing spectacular showcases the jaw dropping talents of the most incredible Illusionists on earth. They have shattered box office records across the globe and dazzled audiences of all ages.

Mistatim takes the stage on Oct. 19-21 as part of The Whiting’s Education and Engagement series. An unlikely friendship is struck when Calvin attempts to “break” the only horse no one can tame in order to prove himself to his father. Speck, who is also struggling to find her place discovers her incredible gift to communicate with horses.

Also part of The Whiting’s Education and Engagement program is the presentation of Young Audiences New York’s adaptation of The Glass Castle on Nov. 3. The Glass Castle is a unique memoir of survival and resiliency told through the eyes of a young girl. It is based on the New York Times Bestselling novel by Jeanette Walls.

Just in time for the holidays, It’s A Wonderful Life: A Live Radio play takes the stage on Dec. 10. This clever stage adaptation breathes new life into the poignant story of George Bailey. Its message of hope and optimism is the perfect antidote to holiday cynicism.

Mannheim Steamroller Christmas by Chip Davis will take the stage on Dec. 15. This show has been an American favorite holiday tradition for over 30 years. Experience the magic of the season with the signature sound of Mannheim Steamroller.

Join us for the annual favorite Holiday Pops presented by the Flint Symphony Orchestra on Dec. 19-20. Music and song, carols and choruses, strings and bows and joyous merriment enliven this musical extravaganza.

Joseph and The Amazing Technicolor Dreamcoat takes the stage for two performances on Jan. 9. One of the most enduring shows of all time, Tim Rice and Andrew Lloyd Webber’s play is the irresistible family musical about the trials and triumphs of Joseph, Israel’s favorite son.

The widely popular Blue Man Group returns on Jan. 29-31. Combing music, comedy, and technology to create a unique show with no spoken language, Blue Man Group is perfect for all ages.

Ragtime The Musical comes to town on Feb. 12-13. The stories of an upper-class wife, a determined Jewish immigrant and a daring young Harlem musician unfold, set in turn of the century New York.

The iconic Annie returns to The Whiting in a brand new incarnation on April 9-10. Annie includes such unforgettable songs as “It’s The Hard Knock Life,” “Easy Street,” “I Don’t Need Anything But You,” plus the eternal anthem of optimism “Tomorrow.”

Other events scheduled include the first annual Gear Up 2 Lead conference on Oct. 2. Gear Up 2 Lead believes that we are all leaders, no matter what age or background and we all have it inside us to be heroes within our community. Tapologyon Oct. 25 features the natural pairing of jazz musicians and tap dancers.

Christmas Rocks II on Nov. 21 includes the popular 250 voice CMI concert choir. Be sure also to save the date for a New Year’s Eve Gala at The Whiting.

The Whiting will announce its Winter and Spring lineup of performances in September. The 2015-16 Broadway series is generously sponsored by McLaren Flint. The Whiting’s Concert Series is made possible by support from Diplomat Specialty Pharmacy. The Family Series is sponsored by Health Alliance Plan (HAP). The official transportation sponsor of The Whiting is Randy Wise Lincoln. Programming support is provided by the C.S. Mott Foundation and Educational support is provided by the Ruth Mott Foundation.

Single tickets go on sale June 12. To purchase tickets, visit TheWhiting.com, call 810- 237-7333 or visit the Ticket Center located at 1241 E. Kearsley St. just off I-475 between the University of Michigan- Flint and Mott Community College. Tickets are also available for purchase at The Whiting’s Down town Ticket Center at the Flint Farmers’ Market. — G.G.