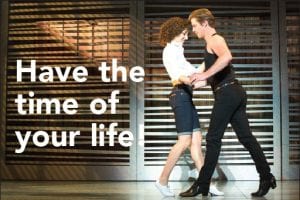 Flint – Christopher Tierney and Rachel Boone will star as Johnny Castle and Frances “Baby” Houseman in “Dirty Dancing – The Classic Story On Stage,” at The Whiting.

“The company that we have assembled for our North American tour is beautiful and truthful,” says Eleanor Bergstein, screenwriter of the film “Dirty Dancing” and book writer for the musical.

“I originally wrote the movie because I love to dance. And since the movie first appeared, the open-hearted audience response has made me believe that everyone has a secret dancer inside them, one they feel could connect them to the physical world in the way they dream.

“If that was true, then its natural form was theater – live audiences watching live bodies dancing and singing here and now. I have added 20 more new scenes, 36 numbers of live music, and an eight-piece band onstage. It’s been a deep pleasure for us to watch audiences around the country respond as this extraordinarily talented group of people brings ‘Dirty Dancing’ home to North America.”

“Dirty Dancing – The Classic Story On Stage” is an unprecedented live experience, exploding with heart-pounding music played live, passionate romance and sensational dancing. Seen by millions across the globe, this timeless love story features the hit songs “Hungry Eyes,” “Hey Baby,” “Do You Love Me?” and the heart-stopping “(I’ve Had) The Time Of My Life.” London’s Sunday Express says “This crowd-pleasing stage adaptation hits the jackpot!”

Frances ‘Baby’ Houseman is on vacation in New York’s Catskill Mountains with her older sister and parents. Mesmerized by the racy dance moves and pounding rhythms she discovers in the resort’s staff quarters, Baby can’t wait to be part of the scene, especially when she catches sight of Johnny Castle, the resort’s sexy dance instructor. Passions ignite and Baby’s life changes forever when she is thrown into the deep end as Johnny’s leading lady, both on-stage and off.

The North American tour of “Dirty Dancing – The Classic Story On Stage” is produced by Amber Jacobsen, NETworks Presentations LLC, Grove Entertainment, and Col Joye in association with Lionsgate and Magic Hour Productions.

The performance is a part of the Bright Lights, Big Broadway series at The Whiting sponsored by McLaren Flint.

For tickets and information, visit: www.TheWhiting.com!

Good seats are still available for this performance. Tickets are priced from $29 to $69.

To purchase tickets, visit TheWhiting.com, call (810) 237-7333 or visit the Ticket Center located at 1241 E. Kearsley St. just off I-475 between the University of Michigan -Flint and Mott Community College. Tickets are also available for purchase at The Whiting’s Downtown Ticket Center at the Flint Farmers’ Market. Smart phone and tablet users can download The Whiting App to make purchases.