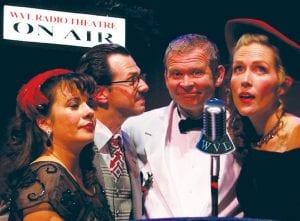 Members of the cast of the “It’s a Wonderful Life” live-radio play, coming to the Whiting, Dec. 10.

FLINT – The Whiting is presenting an evening based on a holiday classic. It’s A Wonderful Life: A Live Radio Play will take the stage Dec. 10 at 7:30 pm.

It’s Christmas Eve in 1945, and only a handful of WVL Radio’s actors have braved the blizzard to perform that evening’s broadcast of It’s a Wonderful Life and keep the station afloat. This clever stage adaptation breathes new life into the poignant story of George Bailey and Bedford Falls.

Nominated for five Academy Awards, Frank Capra’s beloved film is an undisputed holiday treasure, ranked #11 in the American Film Institute’s list of the 100 best American films ever made — and also their #1 most inspirational American film of all time.

This 1940s “live broadcast” of Frank Capra’s beloved film takes us back to the Golden Age of Radio. This fresh new adaptation of the film is set in the fictional studio of WVL Radio Theatre on a cold, snowy winter night. Due to the blizzard, the professional voice actors are unable to get through, but the show must go on — so a small but intrepid band of employees manage to create the dozens of movie characters and scenes using just their voices and a sound effects table.

When Frank Capra and his co-writers were working on the original screenplay of It’s a Wonderful Life, the Great Depression was a vivid memory. The story of George Bailey and Bedford Falls is juxtaposed against a time of failing banks, devastatingly high unemployment and a shortage of affordable housing. The circumstances are eerily familiar, and over 60 years later, this story remains as fresh and relevant as ever. Its message of hope and optimism is the perfect antidote to holiday cynicism. With surprisingly simple technical requirements and adaptable staging needs, this exquisitely detailed production is an uplifting story of struggle and triumph, and of the power of a community to weather financial storms.

All seats are just $20, with discounted tickets for children and seniors. Student rush tickets for those 16 or older are available the day of the performance for $12. To purchase tickets, visit TheWhiting.com, call (810) 237-7333 or visit the Ticket Center located at 1241 E. Kearsley St. just off I-475 between the University of Michigan -Flint and Mott Community College. Tickets are also available for purchase at The Whiting’s Downtown Ticket Center at the Flint Farmers’ Market. Smart phone and tablet users can download The Whiting App to make purchases.

This performance is generously supported by HAP, ABC12, TownSquare Media, The View Newspapers, and The Charles Stewart Mott Foundation.

The Whiting is a member organization of the Flint Cultural Center Corporation and is dedicated to bringing the performing arts to the community. The Whiting is a nonprofit organization and an Equal Opportunity Employer providing programs and services without regard to race, color, religion, national origin, sex or handicap. – G.G.