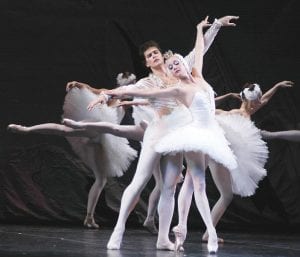 FLINT
— Audiences of all ages will be delighted and mesmerized when Swan Lake, one of the greatest classical ballets of all time, comes to The Whiting stage 8 p.m. Jan. 15.

Set to the magnificent music of Tchaikovsky, Swan Lake
is based on a German fairy tale. The enchanting story follows the heroic young Prince Siegfried as he labors to free the delicately beautiful swan maiden, Odette, from an evil sorcerer’s spell.

Founded in Moscow in 1989 by Sergei Radchenko, legendary principal dancer of the Bolshoi Ballet, this troupe’s principal dancers are from the ranks of Russia’s top companies. The Russian National Ballet Theatre was founded in Moscow during the transitional period of Perestroika in the late 1980s, when many of the great dancers and choreographers of the Soviet Union’s ballet institutions were exercising their new-found creative freedom by starting new, vibrant companies dedicated not only to the timeless tradition of classical Russian Ballet but to invigorate this tradition

timeless tradition of classical Russian Ballet but to invigorate this tradition as the Russians began to accept new developments in the dance from around the world.

The company, then titled the Soviet National Ballet, was founded by and incorporated graduates from the great Russian choreographic schools of Moscow, St. Petersburg and Perm. The principal dancers of the company came from the upper ranks of the great ballet companies and academies of Russia, and the companies of Riga, Kiev and even Warsaw. Today, the Russian National Ballet Theatre is its own institution, with more than 50 dancers of singular instruction and vast experience, many of whom have been with the company since its inception.

In 1994, the legendary Bolshoi principal dancer Elena Radchenko was selected by Presidential decree to assume the first permanent artistic directorship of the company. Radchenko is the founder of the Russian National Ballet Theatre, and she has focused the company on upholding the grand national tradition of the major Russian ballet works and developing new talents throughout Russia, with a repertory of virtually all of the great full works of Petipa: Don Quixote, La Bayadere, The Sleeping Beauty, Swan
Lake, Raymonda, Paquita, Coppelia
and La Sylphide,
as well as productions of, among others, The Nutcracker,
Sylvia
and La Fille Mal Gardee.

Tickets range in price from $17-39. For $12 each, students age 16 and older with valid student ID can purchase tickets to the best seats available on the day of the performance. Availability is not guaranteed as some performances may sell out. Limit two per student. Tickets can be purchased at The Whiting Ticket Center, 1241 E. Kearsley St., during box office hours of 11 a.m.-6 p.m. Monday- Friday and 10 a.m.-3 p.m. Saturday. Tickets also can be purchased by calling 810-237-7333, 888-8CENTER or visiting .