The Whiting welcomes Rhythm in the Night 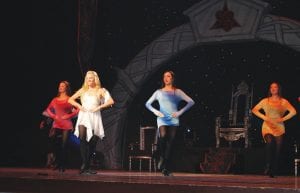 FLINT — After taking up Irish dnacing at the age of 15, about a year later Justin Boros began a two-and-ahalf year run performing with Michael Flattley’s Lord of the Dance. Now the Akron, Ohio, native has teamed up with fellow Irish Dancer Gregg Senko to create, direct and produce Rhythm in the Night, a labor of love the duo began working on in 2005 that features Boros in the lead role of Balor and played at the Whiting last Saturday..

“Touring with Lords of the Dance was one of the best experiences of my life. I left to go to college, but I still had the Irish Dance bug and have been pursuing staying in the Irish dance world and community,” said Boros, who was one of three Americans that toured with Lord of the Dance in 2000 when it was at its peak and playing arenas..

“Right after I got out of Lord of the Dance I had the vision to create another show, so (Gregg Senko and I) got together and started on the concept and it turned into Rhythm in the Night.” 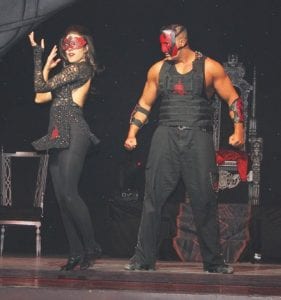 As Azura, Elyse Transon is an evil sorceress who traps Balor and battles Solas and Aisling.

While this production certainly evokes the artistry of traditional Irish Dance, Rhythm in the Night also has specific elements that aren’t as common in this art form. This includes adding the all-encompassing effect of a full orchestra, unconventional costumes and a more ominous story line highlighted by a feel akin to tales like Lord of the Rings or Gladiator.

“The soundtrack is really what makes it different. We created a whole new genre of Celtic music with these composers that we worked with, Andrew and Jared Depolo,” Boros said. “We wanted it to be orchestral. Traditional Irish music has the tin whistle and the violin and we wanted to create this big, dramatic soundtrack. When you hear that and see the feet going at the same time, it takes things to a whole other level.”

As a two-act production, the opening act has nine separate dance numbers starting with Darkness Falls, where Azura the evil sorceress captures the kingdom’s greatest hero, Balor. This leads to Azura luring Balor even deeper under her spell in Temptation followed by the innocence of Antiquity and The Calling, which documents the people looking to Balor’s companion Aisling and younger brother Solas for leadership.

“It took us six months to find the composers then about another two years to compose it. We actually did this production backwards from a traditional production. We had all the choreography, story line and where people would be standing before we created the soundtrack,” said Boros. “It was more like creating a film score because the music came after. We worked with them on almost every bar of music. That’s what took so long.”

Aisling then finds the constellations aligned in her favor in Shooting Stars, Rising Moon details the peoples anticipation of its kingdoms return and in Reign of Fury Balor displays his newfound aggression while preparing his troops for war. From there Aisling has an unexpected meeting with Azura in Serenity and in Midnight Encouter Balor and Solas find themselves on opposite sides of the battle field.

“Every note had to match exactly when somebody was going to turn or face the stage. Hans Zimmer was one of our biggest influences,” said Boros “We’ve been working on this show for many, many years to finally get it to this point. Nearly a decade later we finally have it onstage.”

In act two, which has 11 individual dance numbers, Feisanna, Call to Arms and Enchantment describe the ups and downs of this conflict before Aisling makes her final attempt to save Balor from his evil captor in Darkest Hour. What comes next is an all-out battle that’s alluded to in Winter Winds and thoroughly explored in Celtic Storm and Rise to Redemption.

“We get up super early, travel and try and get organized. Once we’re at the venue, we load in, set up then rehearse and try and get ready for show time,” said Boros. “There’s constant drilling on the steps and getting in position so everyone on stage is in sync and matching exactly and the steps are done correctly. We want to put on the best show possible.”

Finally, Balor and Aisling are reunited in From Darkness to Light. This sparks a reaction from the kingdom titled Celebration that serves as a prelude to the closing numbers Two Step and Rhythm in the Night. Details: www.rhythminthenight.com.

“(Co-creator Gregg Sanko) and I just shared the same vision of basically taking all the elements that people enjoyed from Lord of the Dance, Riverdance and several other shows,” Boros said. “We wanted to make it a full two-hour adrenaline rush where there are no filler numbers or slower numbers that maybe bore you. We wanted to create a two-hour production that captured the audiences attention the entire time they were there.”