First ever “Zine Fest” coming to Flint on April 8 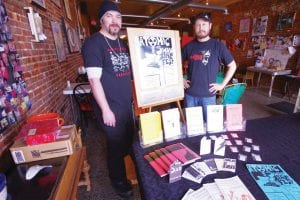 Charles Shaver and Chris Reed display some of the work that will be available at the Atomic Swan Zine Fest, April 8 from 6-9 p.m. at the Lunch Studio, 444 S. Saginaw St., Flint.

FLINT — Chris Reed has been drawing his own comics since he was 10, drawing the art, doing the writing and has even mass produced them with a photocopier.

Reed still does his own comics today as an adult, but they often fall into a genre known as a “zine” — a self-published work of images or text that is produced on a copier and is not generally circulated for profit.

“I was making zines before they were popular,” the Davison resident and published horror author said. “With zines you’re only limited by your imagination and a lot of people appreciate that.”

Reed has joined forces with friend Charles Shaver and Ryan Claytor, who teaches a comic book art class at the University of Michigan-Flint, to put together the Atomic Swan Zine Fest, April 8 from 6-9 p.m. at the Lunch Studio, 444 S. Saginaw St., Flint.

The Zine Fest will be part of the Flint Art Walk on April 8. Reed said he hopes this will be the start of an annual event.

“We’re hoping it can grow from here,” said Reed. “It’s all about the writers and artists in Flint. There’s no real venue for them in Flint. This is another way to get local exposure.”

Reed said there will be 15-20 vendors at the show and the zines being offered will include something for everyone.

Some zines, like his own “Used Addictions,” are more urban and gritty with adult subject matter, while others will appeal to teenagers. One artist displaying his work there is 14, he added.

Zines can come in many shapes and sizes too, he said. Most zines are small booklets, while others are more unique.

One artist will present a zine which looks like a box of crayons, but inside each crayon is actually a rolled up haiku poem. Reed said he will have a thumbsized zine there he wrote and illustrated himself.

“There’s a lot of different subject matter,” he said. “They can be comics, photography, fiction, poetry or haiku.”

“In Flint there’s not a lot of money to spend these days,” he said. “This is affordable. Someone visiting the Art Walk is guaranteed to be able to take home something — a souvenir — from Zine Fest.”