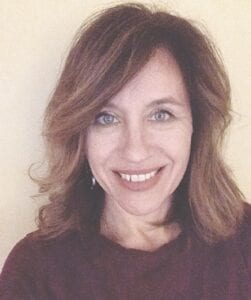 Imagine the scene: two mid-century sisters who miss one another, strolling through a cemetery in Cleveland even though no one they know is buried there. One, a Clairol-assisted brunette who lives in Michigan. The other, a more natural blonde who lives in New York.

They’re in Cleveland because it’s the midpoint between the sisters’ two cities. And they’re at a cemetery instead of the Rock & Roll Hall of Fame because they care more about spring blossoms than they do Elvis Presley. They know they want to be outside and together, two of their favorite places to be.

The last time they were outside and together, they were also at a cemetery. There, they stood holding daisies, their youngest sister’s favorite flower, at her graveside six months ago. They stood silently, looking at one another for clues as to how to act and what to do. They were still astonished that she died on her fiftieth birthday … still stunned that three had become two.

They’re not so quiet or unsure of themselves in Cleveland. Today, they’re curious about what they’re experiencing at the historic cemetery. They see magnolias and dogwoods, monuments, and mausoleums.

“I could be buried in one of these things,” the New Yorker says, peering into a mausoleum window.

“They’re expensive,” says the Michigander. And she makes up an amount to prove the point, although she has no idea the actual cost or if such things are even constructed anymore.

They move on, sharing somber silences for the children buried there, shuddering at the thought. They learn that stones left on graves mean the dead were visited, and they marvel at the graves covered in pebbles, large and small.

And then there is the grave with hundreds of colorful pens sticking up out of the ground. “Harvey Pekar,” the Michigander reads aloud, and they both snicker because at heart they are 11-year-olds. The New Yorker reads the epitaph out loud, “Life is about women, gigs and bein’ creative.”

The older sister bends down, carefully selecting a pen and pulling it from the soft earth. “What’re you doing?” her sister says.

“Taking a pen,” she says, shrugging.

“I mean, Harvey here can’t use it. Someone might as well put it to good use.” She tests it out on the palm of her hand and declares it to be a very good pen indeed. In fact, she imagines drafting this very column with it, already knowing exactly how smooth and fine the writing will be.

She feels a car slow down behind her, watching, perhaps even recording what they perceive as a crime of sorts.

She turns around casually and sees three other women walking. She suggests that they too should take a pen. They answer back angrily, saying they would never “steal from a grave.”

“You’d better put it back,” her sister says. “You don’t want any bad juju.” The writer sighs and puts it back, reluctantly. Later, she will learn that Harvey Pekar was a graphic novelist, once considered the “poet laureate of Cleveland,” who believed life was a losing battle that must be fought. He died of cancer in 2010.

The sisters move on talking, laughing, wondering, and pen-less. They talk about life and death. Joy and sorrow. Family and friendship. Food and wine. Nature and camping. Love and loss.

They tell stories, the same ones they’ve told to one another dozens of times over the decades. They know more, lost more, gained more, and forgotten. They’ve forgiven. They know more about what they still don’t understand. They’re softer with their judgments of the world.

Together, they create new stories to be told in the years to come. One of those stories will be about a beautiful spring day in Cleveland and a long walk in a cemetery. They’ll talk about Harvey Pekar and the almost stolen pen. And they will no doubt ask one another, again and again, what life is about if they had to choose only three things.

Eileen Button teaches at Mott Community College and serves patrons at the Genesee District Library. She can be reached at button.eileen@gmail.com.