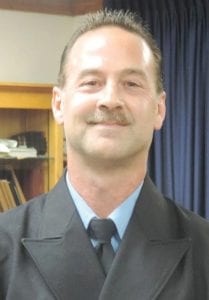 Thomas Stadler, formerly a captain, has been promoted to township fire chief.

FLINT TWP. — Filling a vacancy after nearly two and a half years, the township has a new fire chief.

The township board voted unanimously on Monday to promote Fire Captain Thomas Stadler to the position, based on the recommendation of its Civil Service Commission. Stadler is a 22-year veteran of the fire department, according to a brief biography presented by Township Supervisor Karyn Miller.

At age 18, he began his fire service career in November 1985 as an on-call firefighter with the Mt. Morris Township Fire Department, eventually working his way up to the rank of Captain.

He joined the Flint Township Fire Department as a full-time firefighter in November 1994 and was promoted to lieutenant in June 1997 where he served numerous roles including House Officer of Fire Station No. 1 and No 2.

He was promoted to the rank of Captain in February 2003.

A graduate of Flint Hamady, Stadler holds a bachelor’s degree in business administration from the University of Michigan. He also holds an Associate in Fire Protection Technology from Mott Community College. He and his family have lived in Flint Township since September 1995.

Stadler’s promotion generated quite a bit of board discussion considering that Assistant Fire Chief Mike Burkley has filled the role of fire chief since April 2015, following the retirement of former Chief John Ringwelski.

Trustee Frank Kasle asked for an explanation of the selection procedure and specifically if the candidate scoring highest on the Civil Service tests must be chosen for promotion.

Miller provided a letter from the Commission stating that Stadler scored highest on recently administered tests for promotion.

Clerk Kathy Funk read language from The Police and Fire Civil Service Act 78 of 193 which states, in part that “The Commission shall certify from the eligible list, the name of the person who received the highest average at preceding examinations held under the provisions of this act within a period of two years.”

Kasle said he did not interpret that to mean that the board must accept the candidate recommended by the Commission.

Miller asked Police Chief George Sippert for an opinion, based on his 32 years of experience with the police selection process. Sippert said that typically when the Civil Service Commission is asked to provide a name from its list of eligible candidates, it sends the top scorer and that is the person who is promoted.

Funk added that Stadler’s selection was based on both a written exam and oral interview.

Kasle then congratulated Stadler and said that Burkley also should be congratulated for doing a fine job as acting chief for the past 26 months.

Miller said that the township attorney has drafted Stadler’s contract which will be ratified at the June 19 board meeting when he will be officially sworn in.

He will be paid the Chiefs salary retroactive to June 6.

Stadler, who was accompanied by his family and a large group of supporters including firefighters, said he is “truly honored and grateful for this opportunity.”