They protect and serve 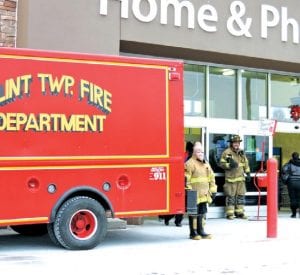 The Flint Firefighters Association took turns ringing the bell for Salvation Army donations during a two-day stint last weekend outside of the Walmart store on Corunna Road.

FLINT TWP. — Firefighters come when called to battle blazes but they also answer the call for other service to their community.

Last month, the Flint Township Firefighters Association stepped up to the plate with deliveries of free turkey dinners to five needy families.

Last weekend, they took turns manning Salvation Army kettles in front of the Walmart store on Corunna Road. Saturday’s shift from 9 a.m. to 7 p.m. was especially brutal as snow and singledigit temperatures moved in. But they were dressed for warmth in their hardy firefighters gear.

Fire trucks were also on hand to collect toy and gift donations.

This year, the collection also served as a “friendly” competition with the Burton firefighters to see who could raise the most, said John Ringwelski, fire chief. As of Monday night, the final tally was not in yet, so no word on who won, Ringwelski said. 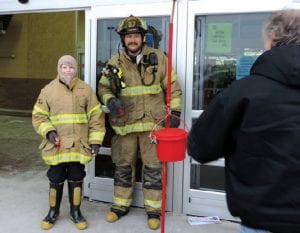 A Flint Township Firefighter with a little helper were among the township Firefighters Association members who took turns last weekend ringing the bell for Salvation Army donations during a two-day stint outside of the Walmart store on Corunna Road.

Firefighters pay dues to create a fund for service and bonding activities all year long including a Ladies Appreciation Night for the patient wives and significant others who also make sacrifices when fire calls come in at all hours of the day and night.

The association also treats itself to a summer picnic to get to know each other and their families, grill hot dogs and hamburgers and have fun, Woods said.