This Compass points to fun!

Call me an obsessive or a fanboy or a music nerd, but don’t call me too old to rock ‘n’ roll. Actually, I think my wife has used variations of all of those to describe me as the occasion of Tom Petty and the Heartbreakers 40th Anniversary Tour gave me the bug to do something that was a little extreme for even a hardcore Petty fan like me – I purchased tickets for three TP&THB shows in three different cities.

The first was at Philips Arena in Atlanta in April. Youngest daughter Elaine and I drove to Atlanta where second-oldest daughter Tricia lives. The three of us had a rockin’ good time as Petty & co. went runnin’ down a dream through 40 years of hits ina2hour-plusshow.

The third and most recent show was just a couple weeks ago at good ol’ Pine Knob (aka DTE Energy Music Theatre) in Clarkston where oldest daughter Emily and son Adam joined brother-in-law Eddie and me on a hot and sticky night for my final round of Heartbreakers iconic tunes. 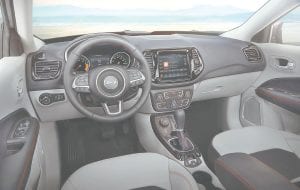 My trip to the middle Petty show, at Milwaukee’s Summerfest in early July, gave rise to this review as I was able to secure a 2017 Jeep Compass Limited 4×4 edition test vehicle for the drive there.

With just Eddie and me on board, we left Lapeer bound for Milwaukee around 6:30 on the evening of July 4. We had planned on getting to Gary, Ind. before taking a few hours break and then motoring on in to Milwaukee on the morning of the 5th. As it turned out, traffic was light and the fun of driving the Compass made the miles and minutes fly by and we made it all the way to the Brew City with just a few snack and bathroom breaks along the way. 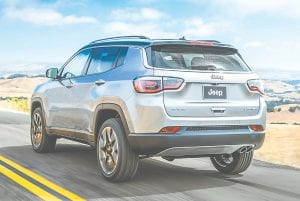 Jeep touts the 2017 edition of the Compass as “a truly global all-new compact SUV.” Having owned a 2007 Compass and with a 2016 model currently under lease in our driveway, I can attest to the “all-new” aspect. The ‘16 is a fine vehicle. But the 2017, particularly the Limited 4×4 edition, is just packed with cool – and useful – features that turns driving from a point-A-to-point-B chore into a fun excursion.

I’d rate the lane departure and blind spot detection safety features as so effective and helpful that I hope every future car I buy or lease will have them. The four cylinder 2.4-liter Tigershark I-4 engine produces 180 horsepower. Coupled with the nine speed auto transmission, the 2017 Compass can handle freeway on-ramps as easy as its six-cylinder siblings in the Jeep family. siblings. I never once had that feeling of the vehicle being underpowered like most of my four-cylinder driving experiences.

Of course, for a music and Apple guy, the most fun was checking out the Apple Car- Play option. CarPlay basically loads appropriate apps from your i-Phone right onto the 8.4-inch touchscreen in the middle of the dash. By appropriate, I mean only the stuff you might need to look at while driving … no email or web browser while driving, thank you. CarPlay also has an audio texting feature which allows you to have the Apple Siri assistant read a text message out loud and respond by voice if you wish. No need to take your eyes off the road or hands off the wheel. Spotify is my streaming music service of choice and it was snap to call up my playlists and favorites through the CarPlay enabled touchscreen. CarPlay and Siri saved us an unwanted exit into downtown Chicago. Of course, two middle-aged guys wouldn’t think of looking at a map for such a simple trip – just get on I-94, turn right at Lake Michigan and stop in Milwaukee, right? Wrong. We found ourselves in a directional quandary as we approached Chicago and could not figure out which freeway offered the shortest route. So, I just asked Siri for directions to Milwaukee and she produced a map on the touchscreen and spoken directions almost immediately, saving us from added miles and traffic congestion. Well done, Siri!

I want to emphasize that neither I, Jeep nor Apple advocate poking around on any apps while driving. The smart – and safest – thing to do is set up your maps and music before putting the vehicle in drive. I was the passenger, not the driver, when asking Siri for directions around Chicago. The best thing about the CarPlay app is that, when I was behind the wheel, my smartphone was safely out of reach and out of mind. I wasn’t even tempted to look at it because I had my map and music apps loaded on the Compass’ touchscreen.

We stayed for three nights in Milwaukee and had Siri and CarPlay guide us to and from the concert venue during our two visits there as well as chosen restaurants and a visit to a very nice local craft brewery. We took the scenic route home, north along Lake Michigan and through the U.P.

Our test vehicle was rated for mileage of 22 mpg in the city and 30 on the highway. We averaged about 26 mpg for the duration of our trip. The car had plenty of other options and features like leather interior, keyless entry and remote start, Sirius XM radio, rear back up camera, 18-inch polished aluminum wheels and panoramic power sunroof. The Compass easily accommodated two guys with a week’s worth of luggage and a cooler. Four adults can ride very comfortably with ample cargo space behind the rear seat. With a base price of $28,995, it stickered out at $34,414 as equipped. It also comes with a 5-year / 60,000-mile powertrain warranty.

With reliable Jeep engineering, 4-wheel drive options for a variety of road and trail conditions, great safety features, styling that reminds one of the iconic Jeep Grand Cherokee, good gas mileage and fair price tag, the Jeep Compass Limited 4×4 edition is a fun way for couples and families to find fun on the road.