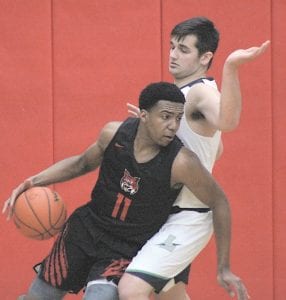 The high school boys’ basketball season was suspended at the district final level. It is hoped that those games will eventually be played. Photo by Joe Oster

LAPEER COUNTY — Families had the weekend to figure out what to do with their school-aged children, many who participate in schoolsponsored sports after Gov. Gretchen Whitmer mandated last Wednesday that all schools in Michigan, K-12, will be shuttered until at least April 5 as Michigan continues to deal with the effects of COVID-19, the coronavirus.

At the same time every major national sport halted their seasons indefinitely to help the nation stave off the spread of the highly contagious and new virus that none of us have immunity to.

“Postseason events sponsored by the Michigan High School Athletic Association have been suspended immediately and indefinitely due to concerns related to COVID-19.

The Ice Hockey, Girls Gymnastics and Lower Peninsula Boys Swimming & Diving Finals had been scheduled for this weekend, while the Girls & Boys Basketball Tournaments are midway through earlier rounds of their playoff progressions.

“Based on the events of the last 48 hours and with things changing by the minute, we believe we have no choice but to suspend our winter tournaments immediately,” MHSAA Executive Director Mark Uyl said. “This is a suspension until we have a better handle on the situation. The health and welfare of everyone involved is our number one priority.”

Uyl added that more information and updates will be forthcoming over the next few days. No timetable has been determined for possible rescheduling of tournaments.

The MHSAA was also being inundated with parents concerned about the spring sports season that is allowed to begin competitions as early as Wednesday of next week. In a statement the MHSAA urged parents to call their child’s school for information as each district will make those decisions independent of the MHSAA for the time being.

Several of the athletic directors in our coverage area spoke to the very fluid, yet serious situation across not just Michigan but across the world.

“I think the biggest thing to keep in mind is priorities and the safety of all the students and staff,” said Mark Cooper, Mayville athletic director. “Yes, it is heartbreaking for our teams and individual athletes that they don’t get to finish the winter sports season at this time and now we are shutting the doors for three weeks. But if just one life is saved because of the precautions then it all was worth it.”

March 13, 2:00 pm: The Michigan High School Athletic Association has directed all member schools to suspend activities in all sports for all seasons – effective Monday, March 16 through at least Sunday, April 5 – to fall in line with Gov. Gretchen Whitmer’s order that all schools close for the next three weeks in order to deter the spread of COVID-19.

All athletic activities to be halted include practices, scrimmages and competitions/games, as well as strength training, conditioning and any other organized sessions and activities in all MHSAA in-season and out-of-season sports.

The suspension of activities applies to sports for all three MHSAA seasons as Spring sports practices have begun, Winter tournaments were suspended Thursday and Fall sports coaches are working with limited numbers of athletes during the offseason.

Statements from the high schools continued to come in Thursday and Friday.

“All athletic activities are canceled until further notice. This includes practices, competitions, workouts, meetings and banquets. This is for both on-site and off-site. Updates will follow when available.”

“As we continue to plan for the next few weeks, all school related athletic activities will be suspended until further notice. There will no games, practices, or school initiated workouts. The Raider Fitness Club is also closed.”

“The Michigan High School Athletic Association has announced that they are suspending ALL sponsored sports activities through April 5th. ALL athletic activities to be halted include practices, scrimmages and competitions/games, as well as strength training, conditioning and any other organized sessions and activities in all MHSAA in-season and out-of-season sports.

We appreciate your patience and understanding during this highly unusual time. Our kids need us to stay positive and assure them that we continue to do what is in the best interest for the safety, health and well-being of everyone as we work to mitigate risk for all.”

At the NCAA level, the college basketball tournaments, as well as March Madness, have also been canceled. Major League Baseball, the NBA, OHL, CHL, NHL, auto racing and soccer have also postponed. The PGA, hosting The Players tournament this week in Florida, allowed fans into last Thursday’s opening round, but announced midday that the remaining days of the tournament through Sunday would be played with no fans present. Friday morning the PGA Tour followed suit and canceled its tour events through April 5, including the Masters in Augusta, Ga. in April.

Over the weekend, Olymic officials in Tokyo, Japan stressed that the July games will continue as planned as Japan was not as hard hit as other nations. Also, a decision on the May Kentucky Derby will be made in early April as states continue to assess just how widespread the virus is in each state.

Fans across the globe will have to adjust to a no-sports month and possibly months. It’s our new reality for the time being.