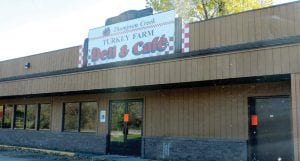 After about 18 years of serving turkeys meals and products in Flint Township, the Thompson Creek Turkey Farm Deli is closed.

FLINT TWP. — Folks accustomed to buying their Thanksgiving dinner at Thompson Creek Turkey Farm Cafe and Deli unfortunately will have to start a new tradition this year.

The popular business at 2105 Mill Road is closed and has been posted with a delinquent property tax notice. The notice to creditors, dated September 29, states that the property was seized due to non-payment of property taxes in 2008, 2010, 2011, 2012 and 2014.

Township treasurer Marsha Binelli did not respond to requests for comment on the back taxes or future of the property.

The property status was listed as in “forfeiture” in 2013, according to delinquent tax statements posted online by the Genesee County Treasurer’s office. The posting indicated $7,783.58 due in 2013 including penalties and interest and $6,733.96 delinquent in 2014. 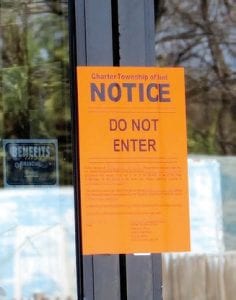 Andy Yuroff, owner of the business, died suddenly on September 17. According to a Facebook page posting, he started Thompson Creek Turkey Farm restaurant in 1992 at the Flint Farmer’s Market. He opened the Mill Road location in 1997 and a third location on Hill Road in Mundy Township in 2005.

The Hill Road location closed in July of this year but the Flint Township and Farmer’s Market locations remained open until recently.

“This was a very difficult but necessary business decision to make,” stated the Facebook page notice, announcing the closing of the Hill Road location.

The future of the Mill Road property is uncertain. Tax delinquency in Michigan entails a three-year forfeiture and foreclosure process. Parcels are forfeited to the county treasurer in the second year of delinquency and are foreclosed if they remain unpaid as of March 31 of the third year.