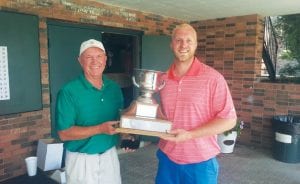 DAVISON – Tommy Thompson overcame a four-stroke deficit on the final day and won the Genesee All Star Classic on June 6-7 at Davison Country Club.

Thompson, a Davison High graduate and four-year letter-winner at Oakland University, was tied for third at 147 after the 36-hole first day, then came back with a 2-under-par 70 on the final day for a 217 total that beat runner-up Andy Johnson by two strokes.

Two other Thompson brothers finished in the top 12, with David Thompson tying for eighth at 225 and Jake Thompson sharing 12th with 227.

Five-time champion Jimmy Chestnut, 2012 winner Chaz Meek and Ryan Burge tied for third place with 221. Dave Johnson was sixth with 223 and Rick Crandell placed seventh with 224. Jason Burge and Jon Walraven tied with David Thompson for eighth to fill out the top 10.

The Genesee All Star Classic is the premier amateur golf event in the area, with a list of stringent criteria required to enter.

There were 80 players entered in this year’s tournament, including 20 in the first-time Senior Division. Mark Christenson shot 231 to win the inaugural senior title by one stroke over Mark Engelman.

Loyd Walter, director of the Flint Junior Golf Association, was honored as the 2014 recipient of the Don Jarrard Award.