You read that correctly. To Flint Township, not Flint. No slight intended to Flint’s beleaguered residents, but Thornton Township’s generous gesture recognized that surrounding communities also are being impacted by the tainted water crisis.

Donations of bottled water and cash have poured into the City of Flint from all over the country and beyond, since news of its water troubles began making national headlines last month. Resources including water, filters and test kits are being distributed at various locations in Flint. They also are available to about 225 non-city residences and businesses, including 53 in Flint Township, who are supplied by Flint water lines.

Sunridge Apartments, 3348 Flushing Road, a 584-unit complex, is one of those “franchise” customers. 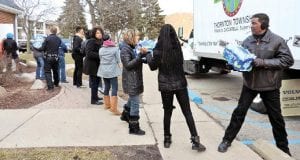 Township Treasurer Marcia Binelli joined an assembly line moving cases of water from the back of the truck to the Sunridge office.

Everlean Jordan, a Sunridge resident, whose husband has health issues, said she picked up a few cases of water at a church and fire station in Flint but otherwise has been buying bottled water. She also said Sunridge management did not notify tenants until recently that they were hooked to the Flint water lines.

Most Flint Township residents and businesses are supplied with water from Detroit and were not impacted when Flint switched to using Flint River water from April 2014 until October 2015, which caused pipe corrosion and lead contamination in the water.

Jordan was one of the residents waiting at the Sunridge office when the truck arrived from Thornton Township.

One of the trucks was delayed by a wheel problem in Kalamazoo but the other rolled into town about 4 p.m. to fulfill its mission.

“We chose to bring (water) to Flint Township because we are a township and we believe not only in working with everyone but townships especially,” said Holbert.

As soon as the community heard about the effort to collect water, they got on board, constantly bringing cases and jugs to the drop-off sites, she said, adding that many of them have family members or friends in Flint.

Also, Thornton Twp. Supervisor Frank M. Zuccarelli was voted Supervisor of the Year in 2007 by the Township Officials of Illinois for his outstanding service to his constituency.

The water drive was publicized on the township’s Facebook page. With help from the Village of South Holland, The South Holland Business Association, Walt’s Food Center, and Thornwood High School Alumni, Thornton Township collected more than 17 pallets of water for its first delivery and pledged an ongoing effort as more donations roll in.

Flint Township Supervisor Karyn Miller said that when the delayed truck arrives, its cargo will be stored at township fire station No. 2, 3327 Flushing Road, which is directly across the street from Sunridge.

She also said that volunteers would be hand delivering cases of water to about 28 residences in the township that are connected to Flint water.