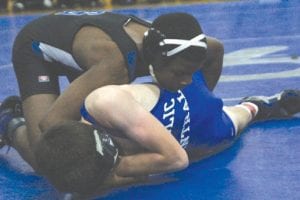 ROCHESTER — Carman- Ainsworth had three wrestlers go 5-0, and the Cavaliers placed fifth as a team last Saturday in the Rochester Adams Invitational.

Malik Dawkins won all five of his matches at 112 pounds, Jacob Weissend did the same at 145 and Lorenzo Redmond was 5-0 at 152 to lead Carman-Ainsworth.

Brandon Wesley was third at 130 and Tae Pendleton took third 171. Placing fourth were Wesley Cummings at 119 and Jaron Thomas at 171. The Cavs had to void 125, 140 and heavyweight.

Carman-Ainsworth wrestled in the will travel to the Warren Woods-Tower Northville Quad on Wednesday night and Invitational this Saturday. — D.N.