Women’s History Month offers opportunity for FIM to recognize them 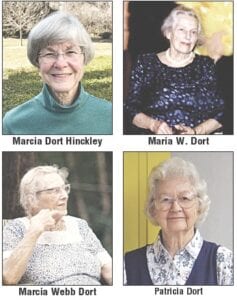 FLINT — Marcia W. Dort was 89 years old when the former Dort-home-turned-Flint- Institute-of-Music burned down in 1970. Her daughter-in-law, Patricia, was 52. Her namesake granddaughter, Marcia, was just 25.

But the loss of the building didn’t deter Mrs. Dort or the next two generations of Dort women from carrying on their family’s passion for musical education in Flint and supporting what is now the eighth-largest community school in the arts in the country.

The Flint Institute of Music is honoring these three generations of Dort women during Women’s History Month.

Thousands of students and patrons have benefited from the generosity of the Dort family, and myriad music lovers and supporters since J. Dallas, a cellist, and Marcia founded the Flint Community Music Association in 1917, which birthed a community chorus and symphony known today as the Flint Symphony Orchestra and Flint Symphony Chorus. After more than a century, countless young Flint Institute of Music students still benefit from honors strings programs, tuition assistance, and world-class educational experiences.

“More than 100 years ago, this family started forming what is now an exceptional, award-winning performing arts school and facility,” says FIM CEO Rodney Lontine. “We wouldn’t be where we are if not for the time, talents, and funds of founder J. Dallas Dort, but more importantly, the women in his lineage.

Born in 1881, Marcia W. Dort graduated from both the University of Michigan and Vassar, a feat almost unheard of at the time. She worked as a piano teacher and played the organ at the First Presbyterian Church in Flint. Marcia joined St. Cecilia Society, a women’s music group still considered to be a major musical force in Flint. St. Cecilia was founded in 1890 by J. Dallas Dort’s first wife, Nellie, and a dozen other women. Nellie died in 1900. St. Cecilia is still housed at FIM and holds performances in the MacArthur Recital Hall.

Marcia W. Dort donated her home to the Flint College and Cultural Development Committee of Sponsors in 1958. The home became the Dort Music Center. It would eventually become the Flint Institute of Music in 1966, thanks in part to the efforts of son David and his wife, Patricia. It was sadly lost to fire in 1970 while an addition was being built. The current FIM building replaced it.

Thanks to a gift made on behalf of the Dort Family Trust in the early 2000s, the Dort Honors String Quartet started at the Flint School of Performing Arts. The annual Mrs. J. Dallas Dort Award also stands in Marcia’s name to honor someone who has given significantly of their time and talents to FIM. There are also the FSPA/FSO Chamber Music Series, FSPA Honors String Quartet, Marcia W. Dort String Scholarship, and the FSPA Super Strings Program.

“My grandparents and parents all had a long-time love of music. If you’re a Dort, you’re into music. No one told us we had to; we were just devoted supporters, listeners, performers. My parents’ siblings and my siblings all have music in their blood. Mother had a lovely touch on the piano,” says Dallas C. Dort.

Patricia Dort, an amateur pianist, married David Dort in the late 30s. She volunteered as a truck driver for the Red Cross during World War II. She was president of Junior League and the Child Welfare Society, which owned and operated Cedar Street Children’s Center. She was also one of the most respected members of the 20th Century Club, as was his grandmother, says Dallas C. Dort. This was a group for intellectual women who wrote and presented papers. Most never worked because women just didn’t back then.

Patricia discovered there was a need for textbooks for the visually impaired, according to her family. She not only read and recorded textbooks, but she also learned how to translate texts into Braille.

The third generation of Dort women is represented by Marcia Dort Hinckley, who now lives in Connecticut. She has very fond memories of her mother and grandmother and their affinity for the arts.

“My mother, Patricia, was happy and proud that her siblings, as well as our family, participated in reinvigorating FIM. When my husband and children visited Flint, mom was always pleased to take us to FIM to see what had come to fruition. Mom, too, was modest and humble, but it meant a lot to her that our family was able to contribute in some way to this wonderful place that made music available to all Flint families.”

Hinckley stays connected to FIM because she wants to give back to the city that was her home. She credits Davin Pierson Torre, Flint School of Performing Arts Director, for connecting her to programs that match her interests.

“I’m interested in making music available for all children. It helps with the development of both sides of the brain,” explains Hinckley, who taught pre-K music for many years.

Hinckley has been grateful to contribute to the Seeing Stars! tuition assistance program. She especially loves the pre-K program at FSPA and how Torre and her staff work with public schools to get teachers involved. FSPA’s Carnegie Lullaby Program, which introduces music as a way to help young parents bond with kids, is also one of her favorites.

Torre had nothing but praise for the Dort family and all of its contributions.

“They’re amazing. We have enriched our programs largely because of them and other donors, of course,” she adds. “Thank you doesn’t seem like enough. We are eternally grateful.”

Their children and grandchildren believe Marcia and Patricia would be pleased to see and hear all of the music being played today in “that house.”