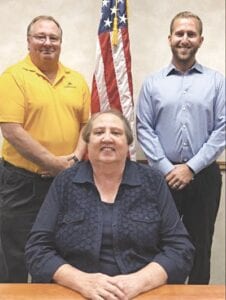 DAVISON — Three incumbent Davison School Board members are seeking re-election for the three open seats on the November 3rd ballot.

Two veteran board members, Kathleen Sudia and Mark McGlashen and two-year incumbent, Granger Stefanko are counting on their strong records and experience to hold their seats.

Sudia, President of the Davison School Board, has a Bachelor’s and Master’s degrees in Education from Central Michigan University. She was an educator and school librarian for many years. She and her husband Bill have been avid school and community volunteers, particularly with the Davison Band and Orchestra Boosters.

Sudia has been an outstanding school district leader, overseeing the phenomenal district growth to become the premier destination school system of Genesee County. During Sudia’s tenure on the school’s Advisory Curriculum Council, which she co-founded, student test scores have grown to be consistently among the highest in the county. She has been the board President and leader during the restoration of Central, the addition of classrooms, libraries, and the building of Hahn Elementary.

“I look forward to continuing to serve our community as we strive to maintain excellence and safety for our children,” said Sudia.

McGlashen, a Special Projects Producer at ABC12 TV news station, has served on the board for 22 years and is the host of “The District,” a news show that aired locally on DTV.

McGlashen is credited with originally creating and continues his support of DTV. The award-laden and highly acclaimed district-run DTV program has led many Davison graduates into successful careers in the Television Industry.

McGlashen himself has won eight Emmys and had many more nominations for his work in various television productions for ABC12 News.

A self-proclaimed “Lifelong Cardinal,” McGlashen is a DHS graduate as are his three children, and he attended Mott Community College. His mom, Pat, is a retired DHS teacher. He is currently the board’s Vice President and Chair of the Building and Grounds Committee which is directing the current Bond projects. Among the Bond projects is an updated DTV studio.

“As chairperson of the bond oversight committee, I want to help ensure that all the bond money is carefully spent to support the needs of our great community for years to come,” said McGlashen.

Stefanko, a Project Manager for DCC Construction, a manufacturing and industrial construction company, won election for a partial seat two years ago. He is a third generation DHS graduate and received his Bachelor’s degree in Finance from MSU.

Stefanko is a natural fit on the Board’s Finance Committee and the Building and Grounds Committee where he has served for two years. His expertise and creative thinking in both committees has made him an instant and invaluable leader in the district.

“Davison’s reputation as “THE Destination District” has only grown in recent years,” said Stefanko. “We are known for outstanding academics, exceptional performing arts programs, highly competitive athletics and exciting new bond projects. I am so proud to be a part of that. Voting for Kathy Sudia, Mark McGlashen and myself are votes to continue Davison’s legacy of success.”

Any candidate wishing to announce his or her candidacy for the Board of Education election Nov. 3 can do so by contacting the editor at ggould@mihomepaper.com.