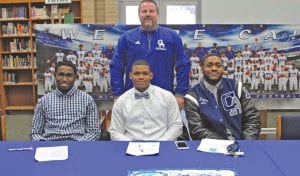 The school that has produced the likes of Jon Runyan, Brandon Carr, Dan Skuta and Gerald Holmes saw three more players sign college letters of intent at a press conference in the school’s media center.

Bradley, a First-Team All-Saginaw Valley League and Honorable Mention All-State defensive end, also looked at Northwood and had a preferred walk-on offer from Eastern Michigan. But he developed an early and lasting attachment to SVSU.

“They were the first team to offer me and we just got that bond,” Bradley said. “We were already close and it didn’t feel right being anywhere else but Saginaw Valley. I can really see myself succeeding at that school.”

Bradley, a 3.0 grade-point student with a 20 ACT, will study accounting.

Bradley likely will be coming in “contact” with Lewis over the next four years, as both will be playing in the Great Lakes Intercollegiate Athletic Association on opposite sides of the ball.

Lewis was a three-time Second-Team All-Saginaw Valley League running back who also drew interest from Valparaiso and other GLIAC schools like SVSU.

“I liked the atmosphere at Northwood and the sincerity of the coaches on my visit,” he said. “It seemed like a good fit for me. I felt like I could be very focused and productive there.”

Also landing on the SVL All-Academic team all four years in high school, Lewis built a 3.9 grade-point average and earned a 27 on the ACT. He will pursue a business administration degree in entertainment sports and promotion management.

Jackson turned in a standout season as Carman- Ainsworth’s quarterback last fall, earning All-SVL honorable mention, but will return to his natural position as a defensive back in college.

“It really doesn’t matter to me,” he said. “I’m just an athlete. I think I can play any position on the field. It is fun running the ball. Who doesn’t like to score touchdowns? But I like to tackle, too.”

“I really liked how Siena presented itself, and the atmosphere there,” he said. “I like the coaches and the attitude they brought to the table.”

Jackson is considering engineering and international commerce as majors and may double up both.