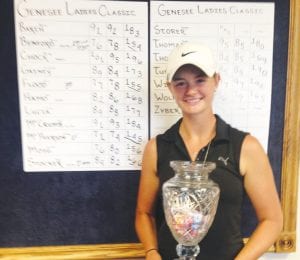 Darci Stocker, also a Powers Catholic graduate and the current Davison High girls’ coach, shot 84-82-166 to win the Mid-Amateur Division for players aged 24-50. The Mid-Amateur and Senior divisions were added to the tournament this year.