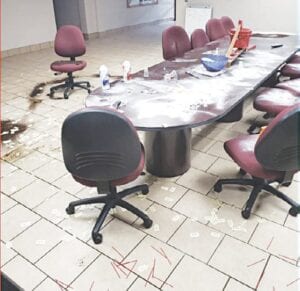 BURTON — Three young girls, all under the age of 10, out in the early morning hours Tuesday, gained access to and vandalized the interior of Burton Fire Station No. 2, according to Fire Chief Kirk Wilkinson.

Wilkinson said the young girls were identified by their parents Tuesday morning after the department put stills from video footage of the trespass up on social media seeking the identities of the three children who did a yet-to-be-determined amount of damage to the station.

The girls gained access to the station, 1320 Belsay Rd., which was unmanned at the time, through a door that did not properly lock behind the last firefighter out, at around 4:15 a.m., said Wilkinson.

He said they were inside the fire station until about 4:50 a.m. before exiting to the rear of the station and lingered in the parking lot for another seven minutes before they left the property at 4:57 a.m.

While inside the building, Wilkinson said they got a couple cans of Squirt out of the vending machine, then went into the living area and the women’s locker room, where they obtained a tube of hand lotion and squeezed it out onto the floor, making a mess.

The three juveniles then proceeded to dump the station’s coffee products including a couple cans of Folgers coffee, creamer and sugar onto the floor and across a dozen office chairs and on the table. They also emptied the cans of Squirt onto the table and chairs, as well as some hand sanitizer.

The girls broken nothing and did no other damage to the building, though they did leave messages on the white boards I the day room.

“They referred to the personnel who worked here as ‘stupid’,” said Wilkinson. “And they used the word ‘poop’ quite a bit. Basically, they made it clear they did not like us.”

Wilkinson said the parents, who live in the nearby neighborhood, brought the girls back to the station and admitted to what they’d done.

The parents agreed to pay for all of the damages and the cost of cleaning, as well as the replacement of the coffee and other products, he said.

The fire chief said the parents did the talking, but the girls had nothing to say during his meeting with them.

“I don’t know that they really feel that way (like the messages left), again these are three young females, all of which were under the age of 10,” he said. “They were all out on their own, which is concerning in itself.”

The children were not relatives of any employee of the city of Burton or the fire department. They live right here in the neighborhood and had snuck out of the house and were “on an adventure of their own”, said Wilkinson.

Police were contacted and they are still investigating the incident. They could send their findings to the prosecutor’s office to see if any charges are warranted.

Wilkinson said the parents have been very cooperative and have agreed to cover all costs and reimburse the city of any cost arising from this incident.

The table with liquid poured on it had been sitting for hours and the laminate table surface has started to separate, Wilkinson said, adding the table may need to be replaced.

As for the door left open, Wilkinson said he doesn’t anticipate it happening again. He said adjustments have been made to the door to make sure it properly latches and said they don’t know if the weather and wind at the time the door was closed had any role in keeping it from latching.

“I don’t anticipate this happening again. I think this was a one-time fluke because… the door did not operate properly the night before,” he said. “It could have been a mechanical failure; it could have been when the firefighters left there was a storm and the wind may have made it so the door didn’t shut properly.

“I’m pretty sure the door situation has been resolved.”

Once the cost of all the damages have been tabulated, he said the parents will receive an invoice.