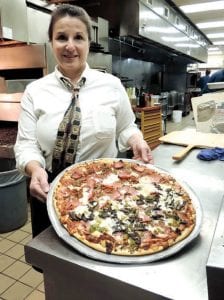 Susan Vallecorsa with one of Ruggero’s prize-winning pizza fresh from the stone block oven.

FLINT TWP. — Thrilled is the perfect word to describe reactions to news that our own Ruggero’s Restaurant, 5311 Corunna Rd., was named one of the top 33 pizza shops in America.

Thrillist described Ruggero’s like this: In its 56 years of family owned life, Ruggero’s has survived the turmoil of Flint’s continual crisis — and several location changes — to remain a warm spot in the city’s culinary scene. It’s a joint that does everything right, from pastas to cutlets to sandwiches. But the pizza is the draw here, a perfect circle of old-school pizzeria style goodness that has become a staple of Michigan comfort-food offerings with its chewy crust and wrist-strainingly piled toppings. But for the real deal, skip the whole pies and get the pizza special, which features two gargantuan slices of Ruggero’s legendary square slices (and a salad, but whatever), a combination of Sicilian and Detroit styles that’s as thick and dense as the bricks that comprise the streets in downtown Flint. But they taste better, because they’re made of cheese, garlic, and pepperoni, not clay. They’re also the best slices the city has to offer.

The “33 Best Pizza Shops in America 2014” list, which included Buddy’s Pizza in Detroit, was complied by Kevin Alexander and Liz Childers who respectively, are Thrillist Food/Drink executive editor and its Food/Drink associate editor. It is the second year they have compiled the list.

Susan Vallecorsa, co-owner of Ruggero’s, said they have no idea how Thrillist found out about them.

“We were totally unaware of it,’’ she said, noting they were notified a day before the list was published. Someone evidently came in, ate pizza and took a photo, she said.

“It is quite an honor to be recognized on a national stage,’’ Vallecorsa said.

Thrillist has discovered what locals have known all along.

Jim Anger of Flushing, a customer for at least 20 years, stopped in recently to order three take-out pizzas for his family’s dinner. He likes that they are made-to-order.

“You just tell ‘em what you want on it and it comes out good,” he said.

Customers came in from Brighton and Detroit on the day the list was published, Vallecorsa said.

The next day, a couple dove all the way from Toledo just to try Ruggero’s pizza and told Vallecorsa it was well worth the trip, she said.

Having its own blend of mozzarella cheese and tomato sauce and using the old stone method to bake the pizza are part of what makes Ruggero’s pizza stand out, she said.

Each pizza must be hand-turned in an1976 old stone block oven instead of being cooked on a conveyor belt that many pizza restaurants use.