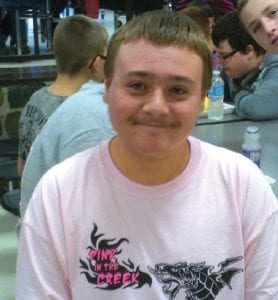 Eighth-grader Charlie Brown wore one of the shirts the Power of You group sold.

SWARTZ CREEK — The Middle School had a pinkish hue Oct. 29 when staff and students sported shirts in tints and shades from cotton candy to fuchsia.

The first Pink Out, organized by the Power of You group, raised more than $1,600 for the American Cancer Society.

The group was formed in February under the leadership of English-Language Arts and Earth Science teacher Brandy Haldy, with additional mentoring from Mike Lilly, artist and former Kearsley and Swartz Creek teacher.

“(Lilly) has guided us and mentored us on how we can do positive things, not only for one another, but for our community as well,” said Haldy.

The Pink Out was the first community project. The initial plan was to raise money for breast cancer awareness.

“After school started up again, we decided we’d run with the Pink Out idea, but try to incorporate all cancers, because cancer is cancer and we know people have been affected by other cancers,” said Haldy.

From Oct. 21-25, students sold more than 400 pink T-shirts designed for the Pink Out. The shirts featured a firebreathing dragon and the words, “Pink in the Creek.”

Many teachers purchased shirts for students who could not afford them, she said. The total raised was “much more than I expected to have,” said Haldy.