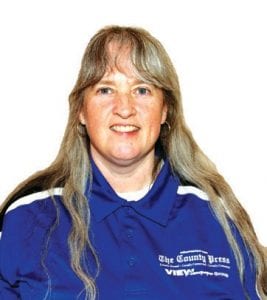 Hey, Keith…Don’t close up the Warv Zone just yet. I think I need to borrow your outdoor meeting room for a little heart-to-heart chat with the youth parents.

You all know Keith. He’s in rotation for our Wednesday County Press sports column space. Go ahead, grab a lawn chair or just sit on the bench for a minute. We need to have a little chat about letting young kids play without the constant barrage of advice from behind the home plate fence.

I stopped by a Little League game on Wednesday since our area sports teams were way off the beaten path vying for soccer regional titles. I miss the Little League games actually. It was fun; for a while anyway. The excitement and interaction of the boys as they took turns throwing pitches and/or batting is always a good time.

“This helmet is funny,” quipped one young lad as he put on his batting helmet that nearly swallowed his whole head. I gently rapped on the top reminding him that it was to protect his little head.

Others stood in line at the edge of the gate ready to take their spots in the on-deck circle, conferring with each other about which bat was the best to use. Another boy was gently reminded by his coach that it wasn’t nice to say someone is a bad hitter.

All seemed to be going fairly well, parents lining both sides of the diamond content to sit in the sun with water coolers, Gatorade and an array of snacks.

Then Timmy was up to bat. I don’t know if that was the boy’s name or not, but we’ll use it just for example sake. Timmy double checked the position of his batting helmet, looked at the volunteer teenage umpire for direction and took his spot at the plate.

That’s when the evening’s relative quiet was broken by the harsh voice of Timmy’s father or grandfather. I didn’t ask which it was, just was floored by the intensity and non-stop corrections that clearly had the young boy rattled. Shoot. I was rattled! To the point that I stopped taking pictures and just stood watching for a minute in disbelief.

“STOP!” I screamed inside my head. “Good Lord, sir. WHAT are you doing?” I wanted to ask. I did not, though, because Timmy’s dad was twice my size, was very intimidating and by this point had everyone’s attention. Timmy wasn’t quite sure what to do.

He looked down the first base line to his coach, who was offering much calmer encouragement. Everything he said was being negated by this meddlesome parent/guardian though.

If Timmy made it through that game or through the ride home without bursting into tears, I’m going to be surprised.

What is it about the few parents who can’t just sit and watch and let the coaches do their job — teach kids how to play sports?

At 10 years of age the kids certainly don’t need to be pressured to this extent — EVER. I didn’t see any other parent bullying their kid. They sat, they watched, they grimaced, they put their head to their hand then when their child turned to them coming off the base path after being tagged out was instead greeted with a “good try buddy” and a high five or a fist bump.

The fact that I’m still thinking about this two days later and can still see the look on this child’s face as he was set up for nothing but failure just says it all.

It was unnecessary and at the very least is going to discourage Timmy and all the other kids like him from even wanting to play. “Dad’s just going to yell at me,” the kids will say as they try to delay getting into the car for the next game.

Please, parents. Just let the coaches do their job and for crying out loud, just let your kid play!

Okay, now everyone get a drink, put the chairs back where you found them for Mr. Keith and let’s play some good strong ball!