‘Tis the season for giving 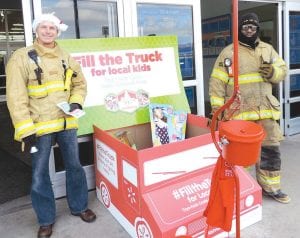 Above, firefighters collected money and toys in front of Wal-Mart. A Mitten Tree is on display at the township hall and boxes are set up to collect toys and food donations.

Volunteers from the Flint Township Fire Department were out in full force all day Saturday, ringing the bell for the Salvation Army in front of the Wal- Mart store on Corunna Road.

They also collected toys for Toys for Tots as part of a friendly competition with other fire departments in the county.

This effort was coordinated by firefighter Ryan Woods with the Salvation Army. The final tally was $ 10,495.05 of which $1960.05 was the money donations and $8535 was the value of clothing and toys donated. No word yet on who won the competition.

Also Catholic Charities was active next door in the Sam’s Club parking lot conducting a food and clothing drive in partnership with Goodwill Industries of Mid-Michigan.

Goodwill brought in a semi to load with donations of coats, clothing, household goods, blankets, and non-perishable food items. 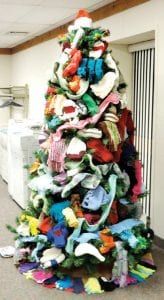 All food, coat, and blanket donations became part of Catholic Charities’ annual collection to help those in need throughout the holiday and winter season. Other donations went to Goodwill’s Community Connection Program to provide vouchers for partnering agencies to further their ability to serve more people in our community.

Across town at Carman-Ainsworth Middle School, Men at Work, a father’s group, conducted its 8th annual Winterfest in partnership with the Carr Cares Foundation, headed up by Brandon Carr, a professional football player who graduated from Carman- Ainsworth High School.

The price of admission was an unwrapped toy for “Toys for Tots”, a new or gently used coat for the Salvation Army, non-perishable food items for Eastern Michigan Food Bank, or cash donations for the Old Newsboys. Santa visited with the children and refreshments and entertain- ment were part of the merriment. 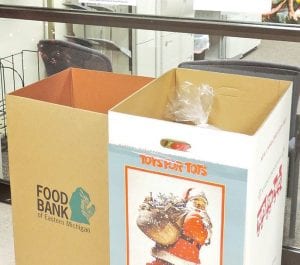 The giving weekend culminated Sunday with UAW Local 598’s Annual Toys for Tots Membership Meeting at which toys were packed in a car hauler for delivery to the Toys for Tots Office. Throughout the year, Local 598 members sell popcorn at Flint Assembly for $1 per bag to raise funds to purchase toys. The Local spends an average of $10,000 to $15,000 per year buying toys, according to a press release. Flint Assembly employees supplement the purchases during a “Bring a Toy to Work Day”.

In an ongoing charitable effort, Flint Township employees are doing their part to help provide a Merry Christmas for those in need.

The annual Flint Township Hats, Mittens and Scarves Tree is now in up in the meeting room. The tree is decorated with hats, scarves and mittens knitted or crocheted by volunteers. The items will be donated to needy children attending Flint Township schools.

Collection boxes will be set up in the lobby until Dec. 18 to accept donations for Toys for Tots and the Food Bank. 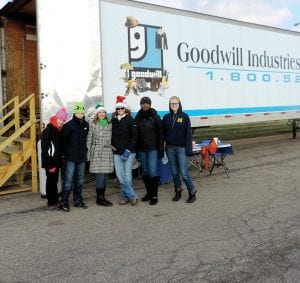 Goodwill parked a truck in front of Sam’s Club to take in money, food and clothing donations.