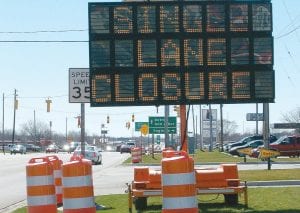 A look down Miller Road as the start of the road construction season looms.

Afterall, its only been three years since a total overhaul of the road that lasted all summer.

This time it is bridge work. The Miller Road bridge is one of 16 spanning I-75 being rehabilitated this summer in a $10.1 million bridge project in Genesee County that began April 7 and is targeted for completion in August.

The orange barrels lining a portion of Miller Road are in preparation for work on the Miller Road bridge expected to begin this week, said Anita Richardson, Office of Communications for the Michigan Department of Transportation. A section of Miller Road near the I-75 overpass will have one lane open in each direction for the duration of the bridge work, an unspecified amount of time, Richardson said.

Work on the Miller Road bridge will be completed during stage one of this project which will result in lane closures on I-75 extending from I-69 to the Genesee/Saginaw county line. To insure safety while the bridge work is being done, temporary concrete barrier walls will be placed at the following bridges: Flint River, Arlene Drive, Swartz Creek, Pasadena Avenue, Miller, Beecher, Flushing (two), Carpenter, Coldwater, Stanley, Mt. Morris, Dodge, Wilson, Farrand and Lake roads.

Single-lane closures will be in effect on northbound and southbound I-75 at Miller Road while crews began preliminary road work for a traffic shift. Once the shift is in place, two lanes will remain open in each direction from 5 a.m. to 8 p.m. Only one lane will be open at night from 8 p.m. to 5 a.m.

Motorists are advised to take alternate routes on I-475, M-13, M-54 or M-15. Detours will take effect as the work progresses.