‘Titanic: The Artifact Exhibit’ coming to Sloan Museum in January 2017 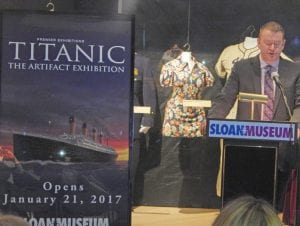 FLINT — The tragedy of the RMS Titanic, immortalized through Hollywood and history, has captivated the public for decades. In January 2017, Sloan Museum, in partnership with Premier Exhibition, will open one of its most ambitious projects yet to transport the public back to 1912 and recreate the experience of being aboard the famous passenger liner.

“Titanic: The Artifact Exhibition” is a unique, interactive exhibit opening Jan. 21 through May 21, wherein visitors will have the privilege of viewing more than 100 artifacts recovered from the wreck between 1987 and 2004. The museum has recreated the entire interior with painstaking detail to further immerse the observer into the time period and class division of the ship.

“We expect the exhibit to be incredibly popular,” said Todd Slisher, executive director of the Sloan Museum.

Everyone will be assigned a boarding pass upon entering the liner that has the name of a real passenger. Period actors will try to capture, with accuracy, the treatment of the specific people on specific levels and divisions of the ship.

Katherine Seymour, head of communications with Premier Exhibitions, said some of the textile artifacts had been preserved through leather wallets and briefcases, and that each piece tells a story of the possessor.

“It was a ship of opulence and dreams,” said Seymour.

A few of the artifacts an officer’s uniform button, tool handle, third class china mug and perfume vials from a travelling salesman. Premier Exhibitions holds sovereign possession over the ship, which is two and a half miles below the Atlantic Ocean.

During the tour, guests can touch the “ice wall,” to get a feel of how cold the water was at the time of sinking. There is also, in the final stretch, a memorial wall, where it is revealed whether or not the person on the boarding pass had survived the voyage.

“We want people to experience the best Michigan has to offer,” said Slisher.