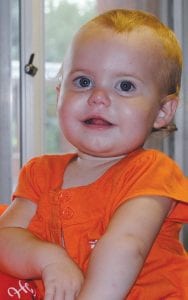 FLINT TWP. — Funeral services were held Wednesday for 20-monthold Madison Rachel Lasley, who passed away Sunday after a ninemonth battle with a rare blood cancer that required a bone marrow transplant to try to save her life.

Born July 20, 2009, Madison was diagnosed on July 1, 2010 with Juvenile Myelomonocytic Leukemia, a rare form of leukemia which affects young children generally under the age of five. Several community fundraisers were held in August to help pay for her medical expenses. A bone marrow drive on her behalf resulted in nearly 500 people tested and 108 potential donors identified.

Her parents, Joseph and Rebecca Lasley of Flint Township, kept supporters informed about her progress through a website at caringbridge.org.

In the latest entry on April 16, the day before she died, her parents reported that she was in the Intensive Care Unit at the University of Michigan Mott Children’s Hospital in Ann Arbor. She died three days before she would have become 21 months old.

Her obituary described her as a mighty warrior.

“From the moment she was born her parents and grandparents Mark and Rhonda Lasley and Paul (Kevin) and Mandy Roop knew she was special. From the day she was diagnosed she endured multiple hospital stays and two bone marrow transplants. Madison’s strength, courage and fight was an inspiration to us all and proved what a mighty warrior she was,’’ her obituary said.

It went on to say that touched the hearts of many people in her short life.

Besides her parents, she is survived by her baby brother Josiah; aunts and uncles, Jon Lasley, Krista Lee, Brian Roop and Rachel Roop; great grand-parents Jim and Frieda Beckman, Ken and Peggy Johnson and Marie Roop and many more aunts, uncles and cousins. She was preceded in death by her greatgrandparents, Warren and Bobbie Lasley, and James (Buddy) Roop. — Rhonda Sanders