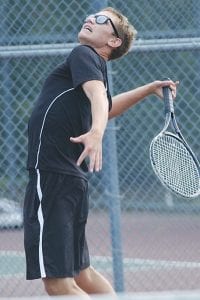 Erik Skaff reached back for a power serve.

HOLT
— In a loaded tennis regional that gets underway Friday or Saturday, Carman-Ainsworth has its work cut out if it has any hopes of qualifying for the state meet. Teams must win the regional or earn 18 points, while the winner and runner up at No. 1 Singles automatically qualifies.

Grand Blanc won the regional title last season, its third straight, and the program was again state-ranked this year at No. 7 a few weeks back.

The Cavaliers first goal will be to improve on their fifth-place finish at the regional, which ended any hopes of picking up state hardware.

Because the Cavs only graduated their No. 1 and No. 4 Singles positions, this was a season to strengthen the squad. That was done by moving last year’s co-captain Erik Skaff up to the No. 1 Singles position. Cameron Simmington also moved up in the ranks from No. 3 to No. 2, while Darrius Jones broke out of the doubles ranks to see how he could do at No. 3 Singles and Matt Nagey moved into the vacant No. 4 spot. 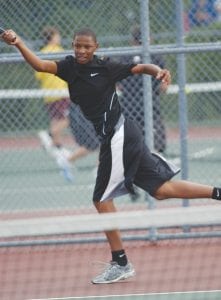 Carman-Ainsworth’s Darrius Jones has seen success this season as a singles player.

Co-captain Mujtaba Syad ended up as part of the No. 1 Doubles tandem with Bijan Torfeh. The others were untested or new players, who could see their first regional action this time around.

“We have to be realistic and we go up against some really good teams in our regionals, including Grand Blanc,” Chunn added at pre-season time.

With Davison in the mix, Carman has seen the Cardinals earlier this season and tied, 4-4, with their Big Nine rivals. On Sept. 9, Davison edged the Cavs, 5-3.

At last Thursday’s Big Nine tournament, Flushing won, followed by Flint Powers, then Davison, then Carman- Ainsworth. Regionals could be the place where the Cavs finally get over the hump when facing Davison, then can take a shot at the potent Grand Blanc squad.