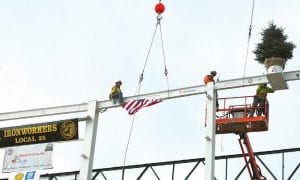 Raising an evergreen and flag to the last beam set in place is a time-honored builders tradition conducted last week by steel workers at Flint Assembly’s new paint shop under construction.

FLINT — Midwest Steel and Iron Workers Local 25 conducted a symbolic “topping off” ceremony to signal the completion of steel work on Flint Assembly’s new paint shop, according to a press release.

Raising an evergreen tree to the last beam erected is a builder’s tradition said to acknowledge safe completion of the work with no harm befalling the workers. Workers signed the beam before using a crane to lift it into place.

Midwest began installing the structural steel on June 16 and is expected to complete the administration building and two-story trestle that connects the new plant to Flint Assembly in December. Overall, workers assembled about 12,000 pieces of steel, using 130,000 structural bolts.