Tornado relief near and far 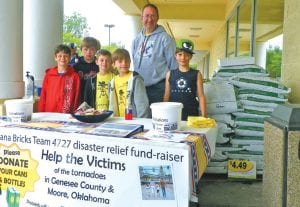 FLINT TWP — Saturday marks the 60th anniversary of the Beecher tornado, one of the deadliest storms in U.S. history that cut a 27-mile-long path of destruction through northern Genesee County, leaving 116 dead, 844 injured, more than 600 homes and buildings destroyed or damaged and about $19 million in damage.

In the aftermath, disaster relief poured in from all over to help with stabilizing, relocation and rebuilding the devastated community.

Now as in 1953, the community has stepped forward to help those in need. They include children, businesses, non-profit and government relief workers.

Flint Township residents have stepped up and contributed to those in need.

“We dodged a bullet,” said Flint Township Fire Chief John Ringwelski of destructive tornadoes that touched down just south and north of here.

The Banana Bricks, a robotics team, at Carman- Ainsworth Randels Elementary School had already planned a fundraiser for Oklahoma tornado victims before the local tornadoes hit, creating a need closer to home.

The group planned a bottle and can collection drive at the VGs grocery story on Corunna Road last Saturday and Sunday with proceeds going to Feed the Children, an Oklahoma City-based charity that has established a fund to support relief efforts there. For every $50 raised, Feed the Children will be able to put together relief packages valued at $250.

“It only makes sense that our fund-raising efforts include helping people in our own community,” said Tom Wickham, the Banana Bricks coach, which is cosponsored by General Motors’ Flint Manufacturing Operations.

“We raised more than $800 over the weekend, which will be split between the Catholic Charities for the Flint Victims and Feed the Children for the Oklahoma victims,” Wickham said. He expects the fundraising total to top $1,000 based on cash donations others have pledged.

Catholic Charities will use the funds donated by the United Way and the Banana Bricks to ensure tornado victims have access to the Catholic Charities Community Closet, where people can get clothes, food and personal (hygiene) products, Wickham said.

For more information about supporting the Randels robotics students’ fund-raising efforts, contact Wickham at 248-707-9064 or tom.wickham@gm.com

The GM Foundation made the lead donation of $50,000. Chevrolet joined in with a donation of a 2013 Silverado full size pickup that will be instrumental in the implementation of the effort.

Additionally, GM employees have spent time raising funds to help victims of Flint-areas tornadoes where an estimated $2.5 million in damages included more than 100 homes damaged or destroyed, according to the press release.

Flint-area GM plants have raised more than $1,400 for victims in Flint with additional fund- raisers planned.