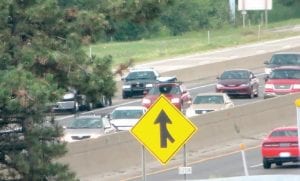 Law enforcement vehicles are routinely placed in harms way when responding to incidents like this recent one on southbound I-75 just north of Miller Road.

FLINT TWP. — The township board unanimously approved a request from the police department to purchase a new patrol car to replace one that was totaled on the freeway.

On July 31 Flint Township officers responded to a crash on southbound 1-75, near Miller Road, said Police Chief George Sippert in his request to the board.

Responding officers in Unit 1304 parked on the shoulder of the expressway with emergency lights activated and exited the patrol vehicle. Within seconds, an oncoming motorist struck the back of the patrol vehicle, forcing it into the vehicle they had stopped behind.

Subsequently, an insurance adjuster who inspected the vehicle determined the damage to be a total loss. The township has received a check from the insurance company for $17,500 for this vehicle but will have to pay more than that to replace it.

Chief Sippert submitted a price quote received under the Macomb County bid process through Signature Ford in Durand, to replace the totaled patrol car – a 2013 Ford Police Interceptor Sedan – with the same model.

The cost of the 2015 Ford Police Interceptor Sedan with similar options is $27,381.00. All costs associated with converting the new car for patrol use, about $10,000, will be covered by the insurance company as part of its policy.

The difference in cost to replace the patrol vehicle is $9,881. Sippert asked the board to approve use of those funds available in its 2015 budget.

“It is a much needed tool for our department,” he said about the replacement car.

About half of the department’s fleet are Ford models and the others are by GM, he said.