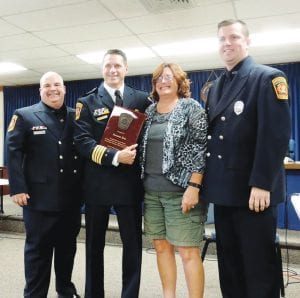 FLINT TWP. — Current and past firefighters were among a large group of supporters who attended the township board meeting Monday night to give a fond send-off to Rossann Klee, who is retiring after 20 years of service.

In addition to the traditional farewell cake reception, Klee was presented with a plaque and proclamation from the fire department and the township board.

In his presentation of the plaque, assistant fire chief Mike Burkley called Klee his “work wife,” for the role she played in helping him keep things on track as an administrative assistant in the fire department. Burkley was accompanied by firefighters Ryan Woods and Chad Wright.

Township Supervisor Karyn Miller read a proclamation stating that Klee began her career as a full-time worker for the township in April 1994. In that capacity, she served four fire chiefs – Greg Wright, Vane King, Gary Borse and John Ringwelski.

Klee also served as steward of AFSCME Local 1918-01 and as a mentor to fellow union members.

“Rossann Klee has been an exemplary citizen and dedicated public servant,’’ the proclamation stated. “She served the residents and businesses of the Charter Township of Flint with the utmost professionalism as an able, thoughtful and dedicated employee.”

Klee also was cited for her devotion “to animals, especially the dogs and cats who are lucky enough to have her as an owner.”

In retirement, Klee will have more time to pursue her passion for traveling and camping throughout the state.