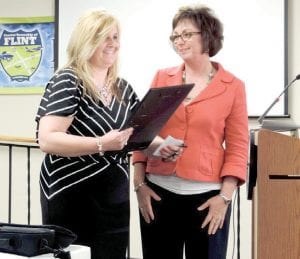 Supervisor Karyn Miller reads a proclamation honoring assessor Nermina Vidovic, who is resigning to move to Florida. A traditional parting cake and coffee reception was held to honor Vidovic.

FLINT TWP. — In its usual style, the Flint Township Board sent off one of its long-time employees with a proclamation and a special cake.

Nermina Vidovic, the guest of honor, has served the township for 12 years.

A native of Bosnia-Herzegovina, Vidovic fled her homeland with one suitcase to escape the religious and ethnic strife in the war-torn region during the 1990s, according to the proclamation read by Township Supervisor Karyn Miller. She moved to Germany before coming to America and becoming a United States citizen in 2004.

Vidovic speaks German, English and her native Croatian. She was hired by the township in August 2003 as a level one assessor and personal property examiner. She became a level 2 Certified Assessor in 2004 and attained level 3 in 2007 after achieving the title of Michigan Advanced Assessing Officer. She has completed all level 4 classes for Michigan Master Assessing Officer, the highest level in the field. 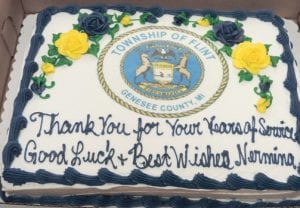 The proclamation also acknowledged Vidovic for her dependability, composure and fair approach to the public and employees.

“It is very hard for me to do this since I enjoyed working for the township,” said Vidovic in her letter of resignation. She also said she is moving to Florida and will think of the friends she is leaving behind during Michigan’s next brutal winter. Her last day is May 28.