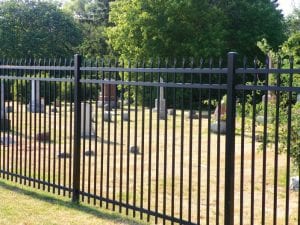 FLINT TWP. — Township trustees faced a grave situation with a bit of humor at its meeting July 16.

A donation of seven burial plots at the township-operated Bristol Road Cemetery caused Supervisor Karyn Miller to jest that it coincidentally matched the number of trustees.

Trustee Frank Kasle then quipped that in that case the board should only accept six of them, meaning he’d pass on his.

In all seriousness, Miller said it has not been decided what will be done with the burial plots.

Clerk Kim Courts said the donation was from Olive Streeter, whose mother purchased eight plots back in 1939, but only buried one family member there.

Streeter first offered to sell the plots to the township, which operates the cemetery. But after Courts turned down the purchase offer, Streeter called back a week later and offered them as a gift.

The donation was placed on the board’s agenda for official acceptance which was unanimous.

Active since the mid-1800s, the cemetery is the final resting place for many of the founding fathers (and mothers) of the township, Miller said.

Headstones there bear names such as Ainsworth, Dye and other prominent citizens whose names also are found on area buildings, streets and other landmarks.