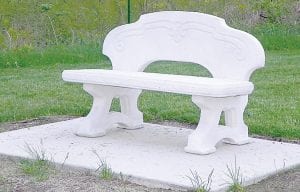 The Dye High School Alumni Association donated a stone park bench on behalf of the Thunderbolts, their team name, at the May 16 meeting of the Flint Township Board of Trustees.

FLINT TWP. — Thunderbolts are enlivening the wide-open vistas of the Flint Township Parks thanks to the Dye High School Alumni Association. A large group of graduates from the defunct high school attended the Flint Township Board meeting Monday to donate a stone park bench on behalf of the Thunderbolts, their team name.

Bob Miller, group spokesperson, who graduated 65 years ago, said the Alumni Association still is active with graduates from 1941 to 1961 — making this year the last one for a 50th year Thunderbolt class reunion.

The group had some leftover funds they wanted to do something meaningful with and decided on the donation of a park bench, Miller said. The large, ornate stone bench was purchased at Krupps Novelty Shop in Lennon and placed at the park entrance. A commemorative plaque will be added to it later, Miller said.