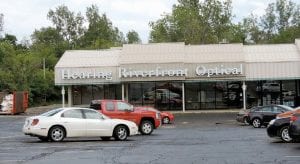 Riverfront Optical on Miller Road has received township approval for an Industrial Development District and a 12-year tax break.

FLINT TWP. — The Miller Plaza strip mall on Miller Road is now part of an Industrial Development District (IDD) recently approved by the township board.

After a public hearing, the board approved an application for an IDD and an Industrial Facilities Tax Certificate (IFT) for DaVinci Equity Group, doing business as Riverfront Optical at 4337 Miller Road,

The IDD applies to the entire property but the IFT only applies to Riverfront, said Tracey Tucker, township building director.

DaVinci is an optical management business pledging to invest about $2.5 billion and create 10-12 new jobs within two years.

The IFT gives DaVinci a 12-year, 50 percent tax break on new development only. The existing facility still will be taxed at 100 percent, Tucker said.

DaVinci purchased the 12,000 square-foot facility last September and is now operating a retail optical business and a lens manufacturing facility there, according to the application from Tim Tippit, DaVinci president and chief financial officer.

The laboratory was moved from a location near Detroit and currently has nine employees. This lab manufactures lenses and with proposed new equipment purchases will become a full-service lab capable of producing any type of lens, Tippit said.

Remodeling work began on the retail side of the business in June and is expected to be completed by September 1, he said.

Extensive rehab is also proposed for the lab side of the building including restructuring and adding state-of-the art machinery.

Kyle McCree, director of business financing for the Flint & Genesee Regional Chamber of Commerce, spoke in support of the IDD and IFT for DaVinci during the public hearing.

“We have worked with them on different issues to help DaVinci make this a reality,” he said. Upgrades planned by DaVinci will convert the business into a 21st century high-tech facility needed to make a new type of lens, he said.

Cheryl Massa, regional practice manager for DaVinci, also spoke during the hearing. She said the company also has added new medical equipment to help with diagnostics of eye conditions such as glaucoma or diabetes-related problems.

“We are investing all this money to bring better eye care and jobs to the community,” she said.

No one spoke in opposition of the IDD or IFT during the public hearings.

Tucker referred media questions about environmental impact such as potential pollution or industrial waste to the business owners but ruled out air pollution because there are no smokestacks. This type of business is more technological than most manufacturing processes, she said.

The township board approved the applications 6-0. Trustee George Menoutes was absent. The applications are now subject to review at the State level by the Property Services Division and the Michigan Economic Development Corporation. The State Tax Commission is ultimately responsible for final approval and issuance of IFT certificates.

Michael Shore, MEDC communications director, said any local pollution concerns should be taken into account during the site plan approval phase but is not a required consideration under statute for the establishment of an IDD.