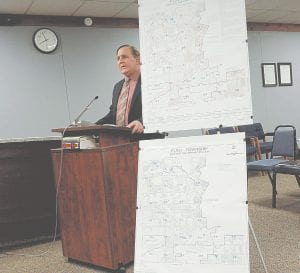 Mike Pifer of Kraft Engineering presented a preliminary report on the status of the township’s aging sewer system.

FLINT TWP. — The township’s aging sewer system could be close to failure, according to a preliminary Capital Improvement Plan for Sewer and Water presented to the township board by Mike Pifer, president at Kraft Engineering & Surveying, Inc.

Pifer walked the board through preliminary findings and proposed a comprehensive engineering study, at a cost of $40-50,000 to determine the condition of the sewers and to identify problems.

“It is better to be proactive than reactive,” Pifer said. The township sewer system was mainly installed 40 to 50 years ago.

“They don’t last forever,” he said.

The township has about 184 miles of sanitary sewers, 159 miles of water mains and about 1,500 fire hydrants, he said. Overall, it is a good system but needs to be examined, updated or repaired, as needed, Pifer said.

“They provide health, safety and welfare to the residents and businesses of Flint Township. It is important to make sure they are working properly,” he said.

The biggest problem with sanitary sewer pipes is that they reach capacity, he said, adding that they were designed to meet needs through the year 2020 and may now be reaching the point of limited capacity.

He also noted that two of four pump stations in the township that were visually inspected are showing signs of problems including rusting and leaking. Failure could lead to costly sewer backups.

“A sanitary sewer pump station is not something you can have go down or back up,” he said. “If it backs up that can be catastrophic. I don’t mean to scare anybody, I am just saying these are important things that need to be looked at.”

Pifer also said he was having trouble getting information and reports from Genesee County Water and Waste which the township pays about $4,000 a month to operate and maintain its sewer and water system. Those records would help provide insight on the current condition of the sewer system.

Pifer introduced Randy Stewart, former building and planning administrator in Davison Township for many years. Stewart shared information about ongoing sewer back-up issues in Davison Township before it took over management of its sewer system in 2004 and implemented a ten-year plan to repair and upgrade it.

Prior to that the township was experiencing eight to ten sewer backups a year, he said. Problems have been minimal since the changeover, he said, adding that they also had difficulty getting records from county water and waste.

Davison Township now has a model system with generators, alarms, mapping, telemetry and other modern technological advances to monitor and maintain the system, he said.

Pifer said replacing the township’s two worst pump stations should be a first priority. He estimated a cost of about $1 million. The project can be bonded and paid for over time but the township has about $8 million in its sewer and water fund.

Pifer said he would write a formal proposal for the engineering study and present it to the board in the near future. He also mentioned that it has been about 18 months since he first began consulting with the township supervisor and treasurer about upgrading, repairing or replacing township sewer lines.