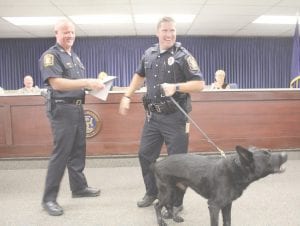 Gunner and Ofc. Neal Donovan were recognized for their service at the Aug. 20 Flint Township Board of Trustees meeting. Photo by Gary Gould

FLINT TWP. — These days, Gunner the K-9 unit sees his master, Ofc. Neal Donovan, off in the morning when he leaves for work and he’s waiting at the door for Donovan when he comes home.

That’s the life of a retired police dog.

Gunner was recognized by the Flint Township Board of Trustees, Aug. 20, for his seven years of service to the township police department where Donovan was his handler. He was recently retired from active duty and Donovan was granted permission to keep the dog he has handled for all those years.

The township board recognized Gunner’s service with a plaque and a gift bag containing a Nerf tennis ball gun, a bag of tennis balls and some dog treats.

Clerk Kathy Funk also said she and the rest of the board pitched in and bought Gunner and Donovan some prepaid veterinary services.

The Flint Township police obtained Gunner from the Netherlands in 2011 and put him through the Oakland Police Academy K-9 program.

Later during the board meeting, the trustees voted to spend $13,500 in drug forfeiture money to purchase another K-9 unit and send it through training at the Oakland County Police Academy.