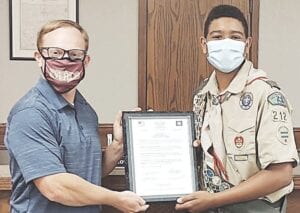 DAVISON TWP. — The Board of Trustees held a special meeting Aug. 13 to pass a resolution recognizing 13-year-old Damion Michael Ketchmark for achieving his Eagle Scout rank.

The warming cubbies will be used by homeless people at the shelter in Flint.

Damion said he earned his Eagle Scout Rank and more than 52 merit badges. He also held the positions of both Chaplain Aid and Patrol Leader, while maintaining and A/B average throughout middle school at St. John’s Catholic School, where he has attended since pre-school.

He will enter high school this fall at Powers Catholic High School. In addition to scouting, he also played three sports throughout his middle school career and is in practice for high school sports this summer. — G.G.