Township board sworn in 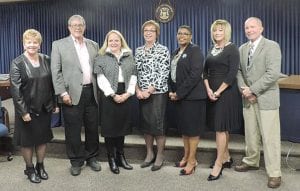 Say hello to your new township board of trustees who were sworn in on Monday.

Sippert quoted the late Dr. Martin Luther King, who said: “The ultimate measure of a man is not where he stands in moments of comfort and convenience, but where he stands at times of challenge and controversy.”

In his 12 years as Chief of Police, Sippert said he has served with men and women on the township board who have met the challenges and stood for what is right in times of controversy. He expressed confidence that the new town- ship board will uphold those principles.

“We look forward to the next four years as we move our township forward,” Sippert said.

He provided brief biographies and anecdotes about his experiences with each board member.

Miller’s election to a third term as supervisor is a first since the enactment of four-year terms, he said.

He shared a story about running into Anderson at circuit court where they recognized as each other as familiar faces but were not sure where they had met.

“We will get to know each other better over the years,’’ he said.

He mentioned Vert’s service on the parks and recreation board and at the senior center. Kasle, on the board since 2007, is now the longest serving board member who has also held a variety of leadership roles.

Klee is no stranger to many having served 17 years as the voice of the Cavaliers, the announcer at Carman- Ainsworth athletic events.

Tucker, who also is building director and economic enhancement director, most recently served as deputy treasurer under departing treasurer Marsha Binelli, who did not win reelection. Chaplain Jerry Foster gave the invocation and closing prayer.

The first official meeting of the new township board will be on Monday, December 5 at 7 p.m.