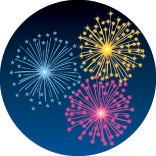 FLINT TWP. — Relief may soon be on the way for residents who have endured weeks of their inconsiderate neighbors shooting off fireworks at all hours of the night.

After hearing numerous complaints in recent weeks, the township board discussed the problem at its July 2 meeting and now will consider following the lead of other municipalities that have banned fireworks use outside of the times allowed under a new state law that went into effect Jan. 1.

The township’s noise ordinance is nullified by the new state law which allows nearly unrestricted use of fireworks for a 72-hour period surrounding 10 legal holidays – New Year’s Day, Martin Luther King Jr. Day, Washington’s Birthday, Memorial Day, Independence Day, Labor Day, Columbus Day, Veterans Day, Thanksgiving Day and Christmas Day. That adds up to 30 days a year including the holiday and the day before and after.

The new law also legalized bigger and noisier fireworks such as bottle rockets and roman candles which has added to neighborhood tensions.

At the July 2 meeting, two residents complained during public comment about experiencing problems in their neighborhood..

A Graham Road resident said his neighbor had started shooting off fireworks three weeks prior.

“They go for an hour. It is really annoying,” he said. “I am just trying to put up with this.

(But) we do need to come up with an ordinance for these fireworks.”

Tahoe Trails in the

None of his immediate neighbors have been shooting off fireworks but they can be heard all around in surrounding subdivisions, he said.

“I am lucky I am retired but if I had to get up early in the morning I would be upset about this,” he said.

Trustee Frank Kasle raised the point that other municipalities are enacting ordinances to confine fireworks to the state-mandated time frame. Though governing bodies can’t outlaw the use of so-called superfireworks during the three-day holiday period, some are trying to ban them during the rest of the year, he said.

He asked for guidance from Fire Chief John Ringwelski.

Ringwelski confirmed that he had heard of other communities passing laws to restrict fireworks use only to the legal holiday time frame. For example, they would be allowed on December 24. 26 for Christmas but not on December 1, he said.

Clerk Kim Courts said she had dis- cussed the issue with assistant fire chief Mike Burkley and expects to have a proposal on the agenda at the board’s next meeting on July 16.

Kasle said he believed it would be appropriate for the township “to get something passed soon.”

Township Supervisor Karyn Miller confirmed with Ringwelski that it is illegal to sell fireworks to anyone under age 18 and also that they cannot be used on school or vacant property without the owner’s permission.

“We have had a lot of complaints today,” Miller said of the early start on Fourth of July fireworks activity. She confirmed the township’s 11 p.m. noise ordinance.

Miller said she understands having to be lenient on July 3, 4 and 5, which state law allows, but “residents are not pleased hearing these fireworks go off in the middle of the night.”