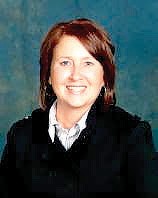 After three terms in office, township Clerk Kim Courts may be stepping down next year.

FLINT TWP. — Around this time next year, the township board could be swearing in a new clerk for the first time in 12 years.

Three-term Clerk Kim Courts announced plans to retire at the end of her current four-year term, which ends after the November 2016 general election. But other township officials said they are hoping to persuade Courts to change her mind.

The entire seven-member township board will be up for re-election next year, if they choose to run. No one else has yet announced his or her intentions but there is plenty of time to decide.

April 19 is the deadline for nominating petitions for candidates to be listed on the August 2 state primary ballot, according to election filing deadlines posted on www.Michigan. gov/elections

The August primary typically narrows down the field of partisan candidates for the general election in November.

Should Courts stick to her decision not to run again, there is one candidate standing ready to throw her hat into the ring.

Kathy Funk, who currently serves as Court’s administrative assistant and secretary to the Board of Trustees, said she is interested in filling the open seat.

Funk said it would be her first foray into running for public office. She has worked full-time for nine years for the township including stints in the sewer and water department and the treasurer’s departments. Funk also became a Michigan Certified Assessing Officer while working in the Assessing Office.

“I’m running because the position needs someone with on-the-job experience who can make a seamless transition from Kim to the next clerk,” Funk said. “I know and have worked both sides of the job – elections and administration. I fully understand what it takes for a municipality to operate on a day-to-day basis. “

She added that her family has been politically active for many years and instilled in her a strong sense of public service.

Courts took office in 2004. She since has been active in community service and earned numerous awards and citations including the 2009 Loretta Manwaring Memorial Award, which is named for a former Flint Township Clerk and awarded annually by Genesee County officials to the top clerk in the county.