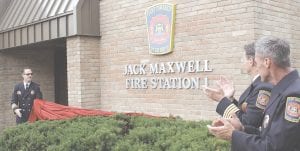 FLINT TWP. — As a tribute to the late Fire Chief E. Jack Maxwell, Fire Station 1, 5331 Reuben St., has been rededicated in his name.

A plaque was dedicated to the family of Maxwell and his name emblazoned on the exterior wall of the station was revealed to a crowd of family, friends and officials.

Supervisor Karyn Miller and trustees Carol Pfaff- Dahl and Tom Klee were in attendance, along with fire and police personnel, members of Maxwell’’s family and retired Chief Donald Rowley.

Also attending was Kildee, who remembered his grandfather as a man who taught others how to be a great citizen and a good public servant.

“He did a lot of things for the township,” said Kildee. “It’s fitting that he is recognized for it.”

Born and raised in Flint, Chief Maxwell served with the Flint Township Fire Department for 25 years, from 1947-1972. He was known for his efforts to promote public safety by increasing the number of fire captains and making sure that buildings were no more than 1,000 feet from a fire hydrant.

“There’s so much said about being the first person to do something,” said current Fire Chief Thomas Stadler. “(Maxwell) will be looked on as a leader and a pioneer. He was a true leader who served with pride and honor.”