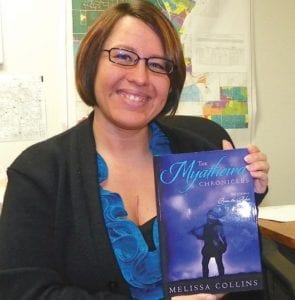 Melissa Collins, a township building code enforcement officer, has just published her first novel and is working on sequels.

FLINT TWP. —Melissa Collins spends her days as a township code enforcement officer in the building department, but she spends much of her free time in another world.

Myatheira is a planet created in Collins’ fertile imagination. It also is the locale for her first novel “The Myatheira Chronicles: The Vor’shai: From the Ashes (Volume 1), self-published August 1 and available on amazon.com.

The Vor’shai are a race of people Collins created and chronicles in the book. The idea for the story has lived inside her head for many years.

“I grew up doing a lot of role-playing games,’’ said Collins, 29. “So coming up with background stories for characters we were playing is something I got used to. This actually started as a background story to a character I was going to play and I just kind of ran with it. I took it out of the scene of the game we were playing and put it in a completely different world and decided to try and make it come alive.”

The book’s heroine is a young woman called Leyna, who is orphaned, living on the streets and pressed to take any job she can find to survive. As an assis- tant at a military academy, she learns to wield a sword then joins an army. From there the story evolves into an “inspirational tale of a woman who will sacrifice everything for retribution, Leyna’s story sees her pushed beyond physical and mental boundaries on a journey of selfdiscovery in a quest to avenge the brutal murder of her mother and save her people from the hands of evil,” according to the book jacket description.

Weighing in at a whopping 702 pages, the book’s length only hints at Collins’ creative stamina. She’s already written a sequel and has notes for at least three more volumes in the works.

Collins wrote volume one about two and half years ago during a five-month period when she did not have a car and nothing else to do besides “sit in front of the computer.” She spent the intervening time editing the book and finding a means to get it published.

Ultimately, she chose to work with CreateSpace, an affiliate of amazon.com, that helps people independently publish and distribute books, music or films in physical and digital formats.

A CreateSpace design team helped Collins to format her book and create the cover design. Getting the book listed on the Amazon bookselling web site is one of the perks of working with CreateSpace.

Collins’ book genre is called epic or high fantasy. Although her characters are an elflike race living in a foreign world, Collins drew a bit of the plot from her own life. She had open-heart surgery four years ago and drew from that to write about her character’s injuries.

“I drew from my own experiences on how that felt at that time and put a little piece of me in the book,’’ said Collins, who had the surgery the day after her 25th birthday and has six to seven years before the tissue valve in her heart will need to be replaced.

Collins has aspired to become an author since fourth grade when she was an avid reader of Nancy Drew mystery books. She would love to see her own books garner a similar fan following and perhaps attract the attention of a Hollywood movie producer.

“I am going to try to get it out there and see if it gets picked up,’’ she said of her marketing efforts. “Obviously, the success of sales will have a lot to do with that.”

The paperback version of the book sells for $26.99 on amazon.com and a Kindle version is available for $4.99.