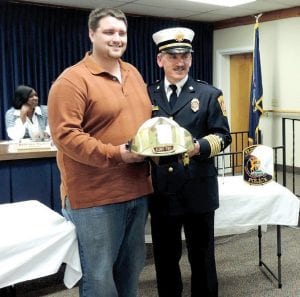 Fire Chief John Ringwelski received an official retirement sendoff from the board including a proclamation, cake and the presentation of his helmet.

FLINT TWP. — Several people choked back tears as the Flint Township Board paid an emotional farewell tribute to its fire chief Monday night.

After 31 years of service, including the past six as fire chief, John Ringwelski announced his retirement, effective April 23.

The board issued a proclamation and held a cake reception in his honor. Assistant Fire Chief Mike Burkley, in keeping with tradition, presented Ringwelski with his service helmet.

Chief Ringwelski said he did not know who would replace him but that his successor is not automatically appointed. The selection process goes through the Civil Service Commission and will involve at least two candidates, he said.

Township Supervisor Karyn Miller also said she did not have a timeline on when that process will be completed but added that the board will take its time hiring a new fire chief.

Surrounded by family and well-wishers, Ringwelski shared several memories in his parting speech. His interest in firefighting was ignited as a young boy when he would go on fire runs with his dad Ed, who served as a township on-call firefighter for 25 years. 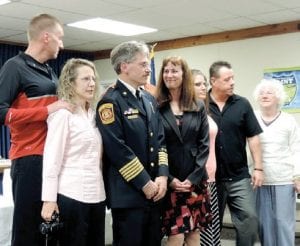 Family members including his mother, sister, wife, son and daughter joined him.

Young Ringwelski started his public service career, while still in high school, as an emergency medical technician for the township ambulance service before it was shut down in 1978 he said.

He began his township career in 1984 as an on-call firefighter and advanced to fulltime status in 1989.

As a testament to his leadership skills, he was promoted to the rank of lieutenant in 1991, fire investigator in 1994, captain in 1995, fire inspector in 1998 and fire chief in Feb. 2009 according to the proclamation presented by the township board.

He worked effectively with the State of Michigan Fire Investigators, the Federal Bureau of Alcohol, Tobacco and Firearms and with numerous local fire departments.

He also was credited with devoting hours of his time to fire safety education.

Chief Ringwelski said that visiting schools to inspire young people is one of the things he enjoyed most about his job.

His voice choked with emotion as his held up his pager that alerts and summons him to fire calls and said turning it in today would be a “sad and happy” feeling.

“It won’t be going off in the middle of the night anymore,’’ he said. Anyone associated with a firefighter understands what that means, he said, apologizing to his children for all their special events he had to leave in the middle of or was not able to attend at all.

“I hope that I have made a positive impact in our community,’’ Ringwelski said. “I know that I am going to miss the action and the interaction with the individuals from our schools, churches and even the residential and commercial structures where we go in on daily basis.”

He thanked firefighters past and present who were in attendance to wish him well.

He also thanked fellow fire chiefs and a mentor present who asked not to be identified.

He acknowledged his family members including his mother and sister, wife Becky and his daughter Stacey who is a teacher in Jackson and his son A.J. who is an EMT in Genesee and Lapeer counties.