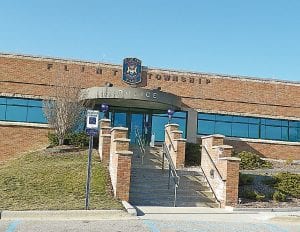 All paid for? That’s a possibility if the board decides to borrow from its sewer and water fund to make an early pay off of bonds purchased in 2002 to build the township police station on Norko Drive.

FLINT TWP. — The township has built up a tidy sewer and water fund reserve in recent years that township Supervisor Karyn Miller proposes borrowing from to pay off the debt on the township police station.

The proposal first surfaced on the March agenda, but was removed. Miller brought up the subject again recently during the 2012 audit presentation.

Miller asked the Plante & Moran audit presenters for an opinion about borrowing from the sewer fund to pay off the police bond.

Miller explained that four years ago, expenses in the sewer and water fund exceeded revenues,. It has taken some time to build up the fund due largely to better collection on delinquent water bills that sometimes went unpaid in the past though the township still had to pay the count, she said.

“We have been very diligent about collecting delinquent water bills … and getting ourselves into a healthy position by doing so,” Miller said.

The township purchased bonds in 2002 to pay for the construction of the new police station on Norko Drive. Those bonds are currently scheduled to be paid off in December 2031. Meantime, the township is paying a variable interest rate of 4.0 to 5.0 percent.

Paying off the loan early would not only save the township approximately $500,00 but would also repay the sewer fund at a higher rate than it currently is earning on investments in Certificates of Deposit, according to information Miller provided to the board from controller Beth Takacs.

Plante & Moran auditor Chrystal Simpson said in response to Miller’s query, that these kinds of inter-fund loans have become common practice lately. About six municipalities she works with have done something similar, she said.

The cash balance in the sewer and water fund is about $6 million so a loan of approximately $1.4 million to pay off the police debt would not be detrimental to cash flow.

With the sewer and water fund loan, which requires board consent, the police station debt could be paid off in 10 years instead of 20.

The township pays interest on the bond twice a year so the board has some time to think about it before the next payment comes due, Miller said.

Trustee George Menoutes said he liked the sound of it, but had some concerns about compromising the sewer and water fund that might be needed in an unforeseen emergency.

“If you deplete this fund, if there is a tornado or something that comes along and tears up the sewer system, where is the money going to come from?” he asked.

Miller said in the event of catastrophe, the money would have to be borrowed if funds are insufficient, but noted the police station payoff would only use about $1.5 million of a $6 million reserve.

Trustee Frank Kasle also expressed reservations about borrowing funds inhouse based on examples in other cities that have done that and ended up bankrupting all their funds.

Miller said she was aware of this being done by other municipalities, including Flushing and Mundy Twp. which have the integrity to pay back the loan, as required by law.

Miller also said that she was not looking for an immediate decision from the board but planned to present the proposal again on a future meeting agenda.