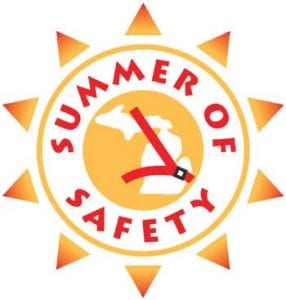 Wearing seatbelts and driving sober are a big emphasis for the Michigan Summer of Safety traffic campaign.

FLINT TWP. — Tragically, two teen girls who were not wearing seatbelts have died in traffic accidents so far this year which underscores one of the messages of a summer long traffic initiative, according to Police Chief George Sippert.

Summer of Safety is a statewide campaign by law enforcement agencies to encourage increased seatbelt use and reduce impaired driving during the summer when trash crashes increase.

In a recent report to the township board, Chief Sippert noted two recent traffic fatalities on the interstate in the township jurisdiction – one involving a teen girl an another involving an older man walking along the side of the freeway.

In hopes of reducing or eliminating further accidents, Flint Township is participating in the Summer of Safety campaign which began Memorial Day weekend and will continue through Labor Day.

“We work zones in our community two or three times a month to focus on these issues.

“Chief Sippert said. “I want to encourage all drivers to put on seatbelts to avoid these tragedies.”

The state of Michigan has a 93 percent rate of seatbelt compliance but Flint Township still had two recent tragedies involving teen girls. In 2015, Michigan saw a ten percent increase in fatal vehicle accidents, after having experience a downward trend in previous years, Chief Sippert said.

The Summer of Safety campaign also is aimed at raising awareness of other traffic safety initiatives such as Click It or Tickets, Drive Sober or Get Pulled Over, motorcycle, pedestrian, bike and child passenger safety, according to a posting on the Michigan State Police web site.

Paid for by federal safety funds, Michigan’s Summer of Safety will support extra traffic enforcement statewide. Officers will conduct seat belt enforcement zones and step up drunk driving enforcement. More than 10,000 people -one every 52 minutes – died nationwide during 2013 in alcohol-impaired driving crashes, according to a Summer of Safety Fact Sheet

Other Fact Sheet data includes that:

• Seat belts reduce the risk of death by 45 percent and serious injury by 50 percent for drivers and front-seat passengers. Michigan’s 2014 seat belt use rate was 93 percent, down from a record high of 98 percent in 2009. Seat belt use nationwide was 87 percent in 2013.

• In 2014, there were 876 people killed and 71,378 persons injured in Michigan traffic crashes. Of those fatalities,188 were not wearing seat belts Michigan law requires drivers, front seat passengers and passengers 15 and younger in any seating position to be buckled up. Children must be in a car seat or booster seat until they are 8 years old or 4’9” tall, and children under 4 years old must be in the back seat.

The campaign includes messages for motorcycle and bicycling safety.

Of those killed while riding bicycles, 88 percent are male. Bicycle fatalities increase during summer months. Pedestrians also are advised to walk facing traffic, wear brightly colored clothing to make it easier for driers to see you and to wear reflective clothing and use a flashlight while walking at night.